Hacking and Hanging with Cal Kolter and Theodore Hamilton.

Find about an incident that happen in his past (achieved).

Defeat Knight of Hanoi and to save Koltar's younger brother from darkness.
Defeat Bohman and Harlin to take back Jin Kolter's consciousness data.
End the conflict between Humans and Ignis.
Stop Ai's vendetta on humanity.(all succeeded)
To coexist with Ai and the other ignis (failed)

He is voiced by Shouya Ishige in the Japanese version and Jake Paque in the English version.

Yusaku is a teenage boy with fair skin, green eyes, and dark blue hair that spikes outward in the back and contains light blue bangs with pink accents. His standard attire consists of a slate-colored jacket with light blue trim over a white dress shirt with a blue tie and a pair of black pants and black and white shoes.

While Dueling in Virtual Reality, Yusaku wears a black and green outfit with a golden stripe going across his body and a grey belt at the waistline. His hair color also changes to yellow and red with pink strips and accents.

Cool-headed and extremely clever, Yusaku's real skill is in his hacking and cracking abilities. As such, he's good at reading people and he thinks on his feet.

Yusaku is described as a boy who doesn't like standing out at school, not that he's timid or shy but because he is a hacker. However, he gets drawn into encounters with people as he tries out Dueling for once.

Yusaku is said to be an intelligent hacker who possesses considerable ability and who solves mysteries in a cool manner. It helps him to read a situation and Talker's thoughts.

While Dueling in Link VRAINS, he is known as "Playmaker".

Like the protagonists of the previous five series (Yugi Muto, Jaden Yuki, Yusei Fudo, Yuma Tsukumo, and Yuya Sakaki), his name contains the character (Yu). In a break from tradition, however, his first name contains three syllables instead of the usual two.

His given name contains the characters "game", and "work". His surname, Fujiki, means "wisteria tree", the blue-and-pink coloring of which matches that of his hair. The kanji of his given name can also be translated as "playing" and "making", which is most likely the pun of his VR name "The Playmaker". 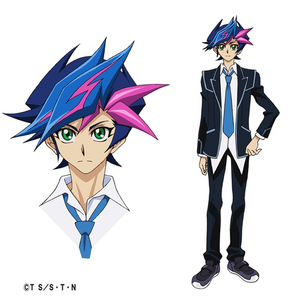 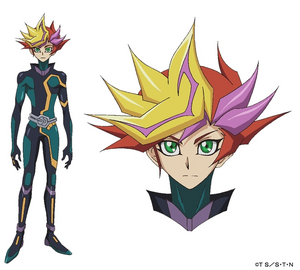