Heroes Wiki
Register
Don't have an account?
Sign In
Advertisement
in: Plagiarism, Candidate for Deletion, Male,
and 73 more

Get out of Satellite and Duel Jack Atlas and take back his Stardust Dragon (succeeded).

Bond Protector
Hope for the Future

He is known for and respected by many other characters in the show for his genius style of dueling, his considerable duel skill, and his cool and clever personality. He uses a Duel Runner, which is called the Yusei Go. In the English dub, "Let's rev it up!" is a common catchphrase that he uses when he summons a Synchro Monster. He is also the adoptive younger brother of Jack Atlas, and the adoptive older brother of Crow Hogan. His deck is comprised of mostly warrior cards which focus around synchroes. He is the current wielder of one of the Signer Dragons, Stardust Dragon.

Yusei is usually depicted as a serious, calm and clear-minded boy; even in very dangerous situations. Due to this he rarely acts on impulse and usually thinks things through before he plays any cards, always trying to stay one step ahead of his opponent. This is made obvious during his duels, as he regularly visualizes card flowcharts in his mind in order to devise his strategies. He is also very selfless, and is hesitant to put the safety of his friends, or anyone else at risk.

Yusei sees friends as the most valuable thing a person can have; he believes no one should ever have to be alone, and tries to convince others whom are against friendship that they are wrong. Yusei is sometimes contradicting to his view on "fate". Just before Yusei dueled Halldor, he stated he didn't care about fate, but during his Duel with Halldor, he says if Halldor felt he was fated to face Yliaster, the same applies to him. Yusei gets annoyed at those who reject cards by calling them trash or say that cards are usless, so much so that he doesn't consider them deserving of calling themselves Duelists or even consider them a Duelist. He is also shown to be annoyed when Trudge refers to him or his Deck as "scum", enough that Yusei told Trudge "All you ever say is 'scum' over and over again, don't you know any other words?". It is also revealed later on in the Dark Signer Arc that Yusei felt guilty about the Zero Reverse incident, and blamed himself before Crow assured him he didn't need to take responsibility for it. He believes that Synchro Monsters are not the bringer of destruction even though Jakob claims it is. He also cares very much for New Domino City's safety, and has even said he will never allow a tragedy like Zero Reverse to ever happen again in the city, even if it means his life. He also told Z-one that nobody has the right to take away another person's future, even it was to save the world. Furthermore, he believes that if there is no present Momentum, then the future cannot be saved.

In the English version, Yusei has had a fear of insects ever since a cockroach nested in his ear, as said by Nervin. He was however able to conquer this fear after his Duel against Lenny, though he seemed to show discomfort in his first duel against Roman Goodwin, where he asked if it "was too much to ask to summon a monster with only two legs".

Yusei has tan skin, a light muscular physique, black hair with gold highlights, and Bleu de France blue eyes. The upper layer of his hair juts upward while the lower layer arches down. Yusei wears a long-sleeved blue jacket with a high collar and amber gems, over a sleeveless black shirt with a red symbol, and wears gloves below his elbows with an amber gem on them. His lower body consists of black jeans with amber knee pads, a belt with two Deck holsters hidden under his jacket (one for his standard Deck and one for his Turbo Duel Deck), and calf-high motorcycle boots. After episode 5, he acquires a jagged criminal marker on the left side of his face which later was somehow covered in episode 116 and episode 117, which is thought to be covered by makeup. His Mark of the Dragon was a red outline of the tail, which was permanently burned onto his right forearm after the events concluding the Fortune Cup story arc. It is later replaced by the dragon head mark upon his defeat of Goodwin, with Crow receiving his former mark.

During the WRGP, he gets a new Turbo Dueling outfit that is similar to his old clothes but is more form-fitting. The new outfit consists of the same blue jacket with amber gems, but the bottom right part is replaced by a black strap with an orange outline. He wears blue jeans with amber gems at the knees and knee-high boots.

Yusei is shown to be very gifted when it comes to computers and machines, able to build and program seemingly anything as he was to build his own Duel Runner (D-Wheel in the Japanese version) from scrap parts, twice, and how he jams the criminal mark on Rally Dawson. Along with the ability to construct one, he is also shown to be very adept at riding a Duel Runner, evidenced numerous times throughout his duels. He is a highly adept fighter, as evident from how effortlessly he knocked out two of Goodwin's security guards. He appears to have expertise in physics considering the fact that at one point Akiza came to request his assistance on the subject and later takes over his parents' job as head of overseeing the completion of the Ener-D. As Team 5D's team captain, Yusei showed to be a very capable strategist and tactician, able to see through his opponent's plans and devising plans for his own team. He is also an adept teacher as shown in episode 75 when he was helping Akiza Izinski get her Turbo Dueling License.

Jack and Yusei have known each other since they were little kids. Along with Crow they always seemed to be together. When they were in their teens, they joined The Enforcers, led by Kalin. After Kalin was arrested, Jack was offered the chance to go to New Domino City and become the duel champ. Jack and Yusei still seemed to be friends, but when Jack tied Rally up and put him in a boat, he gave Yusei the option to either duel him, or save Rally. When Yusei went to save Rally, Jack stole his Stardust Dragon. Their friendship seemed to end then and there, but later on, you can see that Jack and Yusei are like brothers and will always be best friends. Most of the anime's first season is driven by Yusei and Jack's rivalry, which has many similarities to Yugi and Kaiba's from the first series.

Yusei met Kalin back at a young age when he was in a group known as The Enforcers with Jack and Crow. Kalin was the leader of this group, and it is said by Jack that all three of them thought of Kalin as their "Savior". Yusei has a higher respect and concern for Kalin than Jack and Crow, as he was the only one who stayed when The Enforcers separated. He tried to give himself up to Security in order to save Kalin from punishment. Even after Kalin attempted to take his life, Yusei continued to try to save him. Later in the series, after Kalin's Resurrection, Yusei received a letter and headed out to Crash Town to bring Kalin to his senses, after he claimed he wanted to die in a duel.

Leo and Luna helped Yusei have a place to stay after he escaped Sector Security. The two look up to Yusei as an older brother or father figure, since their real ones are not with them most of the time. In the English dub, however, Yusei lost his memory and Leo called him, "Mister Amnesia Man". Leo also said that he was a superhero, while Luna insisted that he was a knight in shining armor. Leo seems to idolize Yusei, as he is always trying to help Yusei. When Yusei was going to Turbo Duel Greiger, Leo snuck into his garage to see his Duel Runner to help Yusei. The twins both look up to Yusei for his strength, courage, and protectiveness of his friends.

Akiza and Yusei are both experienced Duelists and Signers. Yusei has helped out Akiza many times and she always tries to return the favor by helping him, hinting at her special feelings for him. It is not exactly shown straight out whether Yusei shares the same feelings for Akiza, though Martha appeared to be aware of them as she has teased him about liking her.[20] Also, in the English version, he made no objections when Martha said Yusei was right and that Akiza was pretty. Also in the English dub, he states that she is beautiful like her "Black Rose Dragon" during their Duel in the Fortune Cup finals.

Yusei has displayed protectiveness and care for Akiza. When Lyndon held Akiza's hands in some manner, Yusei pulled Lyndon back rather forcefully, as though it was out of jealousy, and Akiza has a shocked look on her face after this. He has also demonstrated that he has a considerable amount of trust in her, since he gives her his "Stardust Dragon" to use against Andre during the WRGP. Six months later, after her decision to study abroad in Germany, she visits Yusei in the garage late at night to say goodbye to him. She tried to confess her love for him, but changes her mind. Yusei and Akiza talk briefly before Yusei takes her hands into his and reminds her to never stop smiling, adding that she has the most beautiful smile in the world. They then gaze into each other's eyes before parting shortly afterward. This is the strongest indication that Yusei may reciprocate Akiza's feelings. 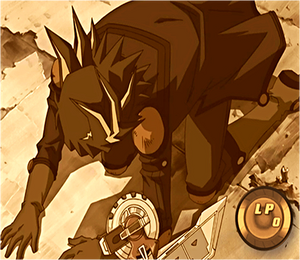 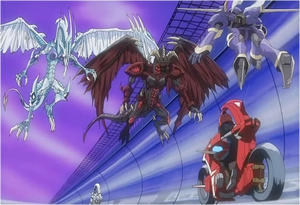 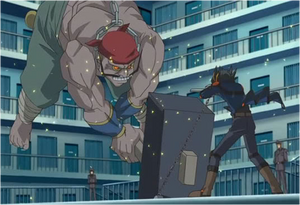 Yusei engaged in several consecutive duels after arriving at the Facilities 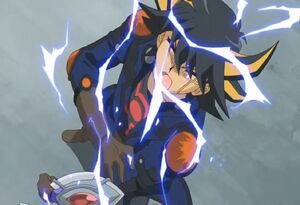 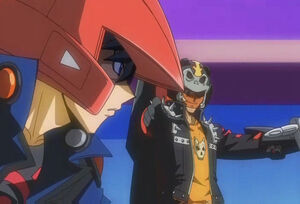 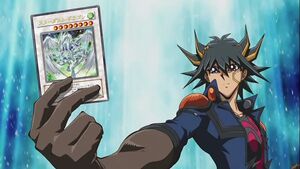 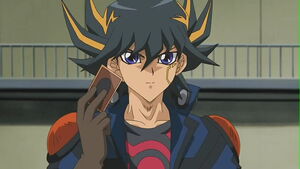 Yusei arrive at Duel Academy to challenge the Dean 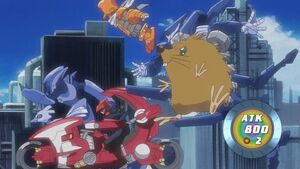 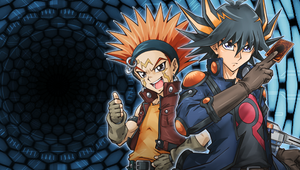 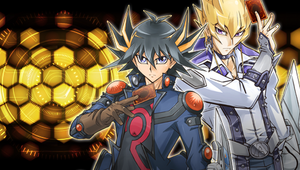 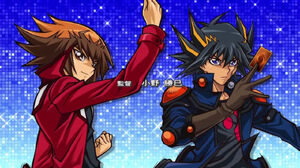 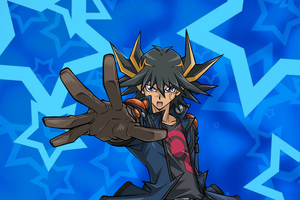 "Let's rev it up!" in the English dub, typically when summoning Junk Warrior.