Yuuko Ichihara is the deuteragonist and lead heroine of the manga/anime series xxxholic and a supporting protagonist in the crossover series Tsubasa: Reservoir Chronicle. Known as the Dimensional Witch, she is an enigmatic sorceress who has the ability to transcend time and space. She resides in a shop in modern-day Japan, where she grants people wishes in exchange for something of equal value to the wish, as her powers do not work otherwise.

She is voiced by Sayaka Ōhara in the Japanese version of the anime and Colleen Clinkenbeard in the English version, both of whom also voice Erza Scarlet and Kirika Tachibana.

Yūko is a very tall (almost as tall as Kurogane), thin woman with pale skin and long black hair down to the back of her knees. Her hair is cut in many layers having front bangs up to her eyebrows, then another layer, reaching up to her jaw, and a layer at her hips and a final one at her knees. Her eye colour is usually red though sometimes it changes to purple or even a turquoise blue so it is suggested that she changes eye color randomly and so, her real eye colour is not known.

She always wears a kimono at her home (though she would prefer to wear a more revealing outfit when she goes out in public) but she never wears the same thing twice (if she ever wears something she's worn before, it's a sign that's something's seriously wrong). When Yuko wears a kimono, she usually has accessories to accompany it. For example, if her kimono has a rose pattern with lace, she will wear a rose in her hair and a lace choker and bracelet. Also, when she has the time, Yuko will style her hair is a neat yet creative fashion and will always decorate her hair with some sort of accessory such as coloured pins or chopsticks. Like her clothes, Yuko has never been seen with the same hair style other than letting her hair loose. On some occasions, the length of her hair is shorter than it looks. An example can be observed during the episode where the Twins are introduced, her hair is tied up in a small bun almost impossible to hold all her hair.

Yuuko is a highly fatalistic person, believing that there is no such thing as coincidence in the world, only inevitability. Many times she seeks to act as a spectator, but in most cases, her intervention yields results that govern the speed and dynamics of the plot. Her histrionics confuses Watanuki, but end up involving him in serious situations, in which Watanuki, is driven by it as part of it. She's fun and respectful of all beings, being these kind or not. According to her, good and bad are concepts that humans decide, and these do not apply to those who are non-human. This kind of thinking occurs when, for example, she decides not to intervene to prevent someone from their mistakes or endangerment, since "everything is a matter of fate".

Though she often acts sarcastic, bossy and annoying towards Watanuki, it's quite evident that she cares for him, as it was seen when she died; "my wish... is for you to continue existing". Essentially everything she makes him do or every time she acts like a jerk, she's probably saving his life, teaching him, training him, or something like that. Sometimes she uses her lecherous side to disturb Watanuki (to her great amusement). She also loves alcohol, which traduces in sending Watanuki to the drugstore every time she's got a hangover.

Towards close friends, Yuko shows a very different side of herself than when she is with a customer. With close friends like Oba-chan or Watanuki, she is kinder and more open to them. She shares more opinions and thoughts with them. Though she is close with her friends, she still keeps serious feelings to herself, not wanting to burden others with her serious problems. This is shown through unmentioned or hidden thoughts through monologues by Yuko when she is alone. Many of these hidden worries are not revealed to other characters (such as Watanuki) even after she dies as she never reveals it to them. Also, even though Yuko is sometimes open about her feelings towards others (telling Watanuki that she is happy that he is at the shop), readers can see that most of the time, her feelings go unsaid. The reason to why Yuuko hides her feelings from others is unknown but it is thought to be because she doesn't want to get hurt or too attached, mostly because she knows that one day she will vanish.

As the plot advances, we can see that she sometimes acts immature to keep Watanuki from realizing the gravity of the situation around him. Yuuko received many nicknames because she never revealed her real name due to a kind of spiritual self, because, as she herself says, whoever knows the name of another person can control it.

She's a sorceress of great power and spiritual energy, who receives multiple adjectives, but she is commonly known as The Witch of Dimensions, due to the travel she sent on the characters of Tsubasa Reservoir Chronicle, in search of Sakura's feathers. Besides the ability to travel in time, she is powerful enough from handling dangerous objects and protective seals, create powerful barriers to protect (and even instruct Watanuki on how to create them, as she did on the night of the Hundred stories ghost / horror (Hyakumonogatari Kaidankai) and then sending Mokona to his side to play with words to block spirits in a full moon night, and she can also talk on good terms with any character of the nonhuman realm, including ghosts, gods, spirits and among others, which often saves Watanuki from death. When doing magic, Yuko often summons her magic circle.

Among her other abilities beside granting wishes, transversing dimensions, she can also create gods for other worlds (which was a wish made by Ashura of Tsubasa), manipulate time (demonstrated when she had Mokona transport the Tsubasa group from Shara to its ancient past of Shura), and speak through Maru and Moro as well through other people's minds. In the anime, when she sends a letter to Watanuki, her responses to him are in "real-time", depending on Watanuki's reaction. In the xxxHolic movie, she gives a glimpse of how powerful she can be when she faces the collector, even though she does not use any offensive attacks. She effortlessly dodges most of his attacks and is seemingly unscathed from a direct hit.

All of Yūko's customers must pay a price in order to grant their wishes, which can be no more or no less than the one demanded, or else harm will come to one's way. She is not one to tell the customer the most direct way to solve their problems because in the end, it can only be solved with that person's own realization and resolution to change themselves. Often if the person lacks the sincere determination to change themselves, an ironic disaster -that even Watanuki, who wishes to stop them from hurting themselves, cannot stop- will inevitably befall them. In Volume 8 when the Tengu-Karasu seek her help to save the Zashiki-warashi, their payment; the Tengu Fan was more than the required price. To balance it out, Yūko sent out Watanuki to assist them.

Her abilities are not unlimited and may almost seem like a curse as it appears that she is unable to do anything for anyone or grant any gift (other than feelings) without it becoming a binding transaction. She posseses knowledge of all types of magic objects that exist, many of which are in her store.

Yuuko in the anime 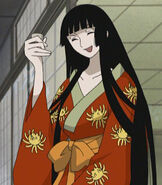 Retrieved from "https://hero.fandom.com/wiki/Yuuko_Ichihara?oldid=2212865"
Community content is available under CC-BY-SA unless otherwise noted.