Levitation (via her book)

Looking for her master.
Sleeping.
Eating fish.
Visiting Alune in the Spirit Realm.

Yuumi is a heroic playable champion in League of Legends. She is a magical cat who once served as the familiar of the yordle sorceress, Norra, before the latter's disappearance.

Yuumi is a magically-altered cat who was born and grew up in Bandle City. She was originally the familiar of the yordle sorceress, Norra, prior to the enchantress' disappearance. This led to Yuumi becoming the new Keeper of Norra’s sentient Book of Thresholds, using it's ability to open portals to multiple different worlds and dimensions to try and find Norra in her newfound quest to bring her lost master home, which she still continues years after her disappearance. Even though she and Book became good friends, Yuumi still longs for companionship during her mission. She is also very easily distracted by comforts like fish or naps, much to Book's dismay (in spite of the fact that Yuumi still refuses to ever give up until she finds her long lost master). 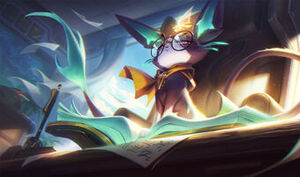 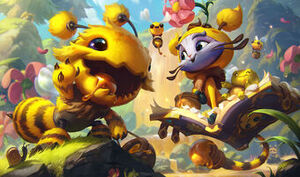