Yuvraj (in short: Yuvi) is the main protagonist of the 2012 Indian Film Delhi Safari. He is a leopard cub, Son of Sultan and Begum, and the leader of the group of animals on the journey to Delhi. He was voiced by Tara Strong.

Prince of the Jungle

Playing with his father, saving the jungle (his home)

Prove to everyone that he really sees and talks with the spirit of his father (succeeded), Save the jungle from destruction (succeeded)

Sultan, Begum, other animals living in the jungle

Yuvi is shown to be very playful and curious. He is usually shown to be innocent and sweet. However, after the death of his father, he became a slightly more serious character. His personality takes some turns throughout the movie, but in the end, along with his mother, learns to cope with his father's death, and returns to his original personality.

Yuvi is shown for the first time when he says he has already lost his father, but he doesn't want to lose his home, then he drips one tear that falls into a puddle.
We are shown a flashback, which shows how Yuvi learns self-defense with the help of his father, Sultan. The leopard cub loses "fight", but tells his father that he will win next time. Sultan assures him that if his speaking would be the left hook, he would be the king of the jungle.
At this point Yuvi's mother and Sultan's wife-Begum will come in. She is angry with her husband for the fact that he may unconsciously hurt their cub during a pretended fight and tell them to stop two.
Unfortunately, her attention and concern is ridiculed by her husband and son.
Begum walks away, offended.. Yuvi worries that "for punishment" his father will sleep outside their cave, but the leopard dispels his son's fears.
In the end (after the romanty song, which Sultan and Yvui sang), Begum stops being angry and forgives them.
A few hours later, Yuvi and his father are on a walk, when a huge construction machine attacks them, Yuvi and his father flee.
Their escape ends in a canyon, in desperation, Sultan rescues his cub, but he is shot himself. Yuvi looks at this scene terrified. That night, after Sultan's death, the animals gather and debate their fate.
Yuvi is still sad because he is very much experiencing what happened in the morning.
The leopard cub asks his mother if his father had no choice but to leave the jungle.
The owl tells him that they can not compare themselves to Sultan, because he was very strong and he had the will to fight. Yuvi tries to convince them not to leave, because it was their Sultan that he considered his strength, "But he always said that he was brave and strong ...". The next morning, Yuvi talks with a mail pigeon and asks him about a "parrot who knows the human language." After a while the pigeon tells him about Alex, a parrot who lives in nearby Mumbai at the director's house and knows the human language.
Yuvi is developing a plan that aims to kidnap Alex.
He manages to pull the bear Bagga and the monkey Bajrangi with his two minions into the plan. Yuvi along with Bagga and Bajrangi bring Alex to the jungle. Begum is angry at them Yuvi tries to explain, but his mother interrupts him, she blames him for Bagg and Bajranga, because she was afraid that Yuvi could have been killed.
Yuvi told her that he did it because his father's spirit, Sultan, came to him at night and told him that Begum must doing something, but she interrupts her son and tells him that his father is dead and that the dead do not return to the world of the living. Yuvi (after the screen, we hear his voice), who says that leaving the jungle is like leaving his father, because the jungle is full of memories of his father.

After this incident Alex pretends to have lost his voice. The animals consult a doctor Jadibuti Baba a turtle who prescribes some ayurvedic medicines of sandalwood, rose, guava to recover Alex's voice, claiming that he has hypertension, stress and high blood pressure. Bajrangi wholeheartedly does the hard work, sometimes himself getting injured. One day he gets to know that Alex was just pretending and chases him leading himself to inadvertently hit a beehive. All the animals run with bees chasing them. A thrilling experience of trains follows after which Bajrangi tells Alex how guilty he feels of thinking to kill him. Alex also realizes how selfish he was and decides to help animals to help them to justice. Begum tells that no one is going to Delhi after listening to a tiger's story of how he only survived death at a human's hands by being a coward and forsaking his old ways; thankfully, following a pep talk and seeing Sultan's spirit and Yuvi who inspires them, Begum changes her mind and with renewed hope, proceeds to Delhi. They finally reach Delhi and tell their message through Alex to the Prime Minister of the country that they want peace between humans and animals and how this young little cub Yuvi inspired all of them to go to Delhi despite all the incidents. In the last scene, it is shown the jungle is saved courtesy of a shared land act (with the area being called the "Sanjay Gandhi National Park-Borivali") and all are happy and settled. The film ends with all animals settled in the Jungle with Yuvi seeing his father's spirit and Begum together happy and Yuvi smiling.

Yuvi has yellow fur with a white underbelly. His paws are tipped with white and so is his tail. He is covered with black spots. He has amber eyes and a small tuft of fur at the top of his head.

Yuvi is a character important for the film. Thanks to him, the jungle remained almost intact and the animals returned to it.

Yuvi loved his father very much. He regarded him as a model for imitation and he wanted to be ,,just like Dad" when he grew up. The cub survived his father's death because he loved him very much, it was his death that made Yuvi no longer playful, only more serious.

Yuvi loved his mother as much as his father. Sometimes he was angry that Begum was overprotective, but he loved  her anyway. The cub also wanted to prove Begum that he was talking to his father's spirit, although she didn't believe him at first, when she saw Sultan's spirit, she believed her son. 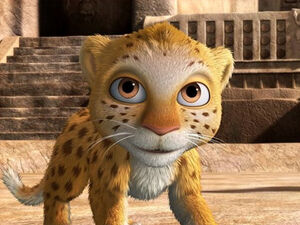 Yuvi with his father - Sultan 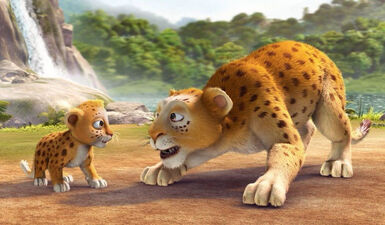 The cub play with his father
Add a photo to this gallery
Retrieved from "https://hero.fandom.com/wiki/Yuvi_(Delhi_Safari)?oldid=1712424"
Community content is available under CC-BY-SA unless otherwise noted.