You Show Duel School Student
Member of the Lancers

Yuya is a young boy with crimson eyes, and dual-colored green and crimson hair of average length sticking out in downwards pointing spikes all around his head in a similar manner to Jaden Yuki, with the exception of one short-upwards pointing spike of green hair. He wears his good-luck charm pendant on a simple string around his neck, and a buckled collar, and also wears a pair of golden goggles with orange lenses on his forehead, with a blue star obscuring the right lens.

Yuya wears a simple red shirt with a thick, silver-buckled brown belt over it, green pants with what appear to be "Deck pockets" on each leg, and magenta shoes, as well as crimson wristbands. He also wears his gold and red lined white jacket over his shoulders like a cape, in a similar manner to Yami-Yugi later googles was removed but wearing RESTOL Pilot Suit (Like Kang Maru).

A fun-loving and energetic boy, Yuya is very theatrical and loves to entertain people, traits he seems to inherited from his father, Yusho Sakaki. He idolizes his father very much and wishes to become an entertainer like him one day. After his father disappeared during an important match, Yuya was left heartbroken and traumatized by the event because his beloved father was labeled as a "coward". As Yoko Sakaki had stated, Yuya acts like a fool merely to beat people to insulting him about his father disappearing. Yuya even joked about his father when Noboru Gongenzaka brought up the fact that he should act more serious about his Duels like his father.

Due to Yuya's buffoonery, his friends and other people are often baffled by Yuya's behavior and believes he doesn't take things seriously. Because his father was so famous, his friends and other people seems to have high expectations of Yuya to live up to his father's reputation while simultaneously quick to bring up Yusho's "cowardice" or scold him for his clownish actions. During his Duel with Strong Ishijima, Yuya proved to be quite clever and skilled in Action Duels, having learned everything from his father.Yuya has a habit of putting his goggles over his eyes when he is upset, something he did since he was young.While not fully Yuya has anti heroic qualities such as disturbing people with his methods.

Like the protagonists of the other series, Yugi Muto/Yami Yugi, Jaden Yuki, Yusei Fudo, and Yuma Tsukumo, his name contains the syllable "Yu".

Yuya is the name of a powerful Egyptian courtier during the eighteenth dynasty of Ancient Egypt, father of Tiye, the Great Royal Wife of Amenhotep III. When the latter died, his son ruled the Ancient Egypt as Amenhotep IV, but later changed his royal name for Akhenaten, who may have been a reference to Akhenaden, the father of Seto and uncle of Atem.

In his childhood, Yuya sat by himself crying when his father, Yusho Sakaki came in to cheer him up. He gave him the advice on laughing whenever he felt down and used Yuya's Pendant to explain that if Yuya was happy, the happiness would swing back at him.

At a later point, Yuya and his mother, Yoko Sakaki, watched the final Duel between Yusho and Strong Ishijima. When Yusho did not show up, Yuya ran to the bottom of the stands, saying that his father would appear, and challenged Ishijima to a Duel until his father arrived. Yoko pulled Yuya from the stands as he continued to protest.

Yuya and Noboru Gongenzaka were engaged in a Duel in You Show Duel School to recruit future students. As Noboru called out to Yuya to Duel in a one-on-one match, he boldly made a stage performance with "Hippo Carnival" and started to dance. After Yuzu Hiragi accidentally broke the Solid Vision machine, Yuya fell to the ground, but he managed to make a quick recovery and pulled a funny face after seeing Tatsuya looking concerned. At the lounge, Yuya was frustrated that he couldn't entertain his audience, much to the annoyance of his friends. When Nico Smiley offered Yuya a chance to fulfill his desire of Dueling Strong Ishijima in his father's place, Yuya became upset. Eventually, he left the school and sat by himself, remembering the time when his father told him to stay positive when he felt down. He later made his way to the Dueling arena to participate in Ishijima's Duel, dressed as a clown. Yuya sneaked up behind Ishijima and taunted him behind his back before revealing himself, much to Ishijima's shock and anger. Yuya apologized for his actions before commencing the Duel. He put up a good performance with "Entermate Discover Hippo" and used the Action Cards that were scattered around the battlefield to save himself. Yuya eventually Summoned "Odd-Eyes Dragon" in an attempt to defeat Ishijima's "Battleguard King", which had been weakened by "Wonder Balloon", but Ishijima managed to counter Yuya's play with his own Action Card, "Miracle". "Odd-Eyes" was then destroyed by "Battleguard King", pushing Yuya to a corner and making him lose hope. Remembering his father's words, Yuya regained the courage to continue. Suddenly, his pendant reacted with three of his Effect Monsters - "Stargazer Magician", "Timegazer Magician" and "Odd-Eyes Dragon", transforming them into Pendulum Monsters, while "Odd-Eyes Dragon" was transformed into "Odd-Eyes Pendulum Dragon". Using his Spellcaster-Type Pendulum monsters, Yuya performed the first Pendulum Summons, Special Summoning "Entermate Sword Fish", "Entermate Whip Viper" and "Odd-Eyes Pendulum Dragon", to the amazement of the audience. Using his new monsters to support "Odd-Eyes Pendulum Dragon," he destroyed "Battleguard King" and wiped out Ishijima in a single attack. Afterwards, he was swarmed by people asking about the Pendulum Summon that he'd performed, though he seemed unaware of the details himself and didn't seem to remember exactly what had happened.

The You Show Duel School received a flood of applicants, all eager to learn how to Pendulum Summon. Yuya and Yuzu had an exhibition Action Duel, though Yuya received a swat from Yuzu's fan beforehand for not taking it seriously. He portrayed her as a fan of Ishijima looking for revenge after being put on the spot. On his second turn, Yuya attempted to Pendulum Summon again, but the Summon failed. Theorizing that it might only work when he was in a pinch, he urged Yuzu to attack him with all she had, but the Summon failed again and Yuzu defeated him. He showed Yuzu and the applicants his Pendulum Cards afterwards, annoying the applicants as they thought that Yuya might have cheated against Strong Ishijima and they couldn't use the Summon without the Pendulum Cards. All but Tatsuya left, though the boy believed in Yuya, and Gongenzaka encouraged Yuya to support his fans. Yuya agreed, vowing to master Pendulum Summoning. He finally did so, replicating the conditions of his Duel with Strong Ishijima after 291 Duels against Gongenzaka, though the ordeal left him sleeping through his math class the next day. When asked the answer to a problem, he bolted upright in his seat and began to recite his Pendulum Summon chant, before trying to wriggle his way out of the situation by stating that the answer was "the right one," earning him a swipe from Yuzu's fan.

After the day ended, Tatsuya, Ayu and Futoshi arrived, eager to see the Pendulum Summon. They were interrupted by a student of the Leo Duel School, Shingo Sawatari, who threw three sucker-tipped darts at Yuya. He admitted he was a big fan of Yuya's Pendulum Summoning, and after learning that they were going to see a Pendulum Summon, offered the use of the Center Field at LDS. Shingo showed them around, and Yuya was impressed by the various courses the school had on different Summoning forms. He was briefly distracted by someone noticing him, and rejoined the others. At the Duel Field, three of Shingo's friends approached them, and Shingo asked if he could show them Yuya's Pendulum Cards. Yuya was reluctant, but he agreed, holding out "Stargazer Magician" and "Timegazer Magician". Shingo swiped the cards and showed them to his friends, then he stated that he was keeping them for himself, suggesting that Yuya Duel to get them back. With Yuzu, Ayu, Tatsuya and Futoshi held hostage, Yuya had little choice. He took the first turn and used "Entermate Whip Viper" to make his way around the "Dark Town's Prison Tower," attempting to find Action Cards, but not only were they Traps that reduced the ATK of "Whip Viper," but they also put his friends at risk. Shingo then proceeded to use the two Pendulum Monsters that he had stolen to Pendulum Summon three monsters himself, much to Yuya's shock.. Yuya began to grieve for the sake of his friends, but regained his confidence when he drew "Block Spider", using it in conjunction with "Mimiclay" against Shingo to defend himself. Yuya later used "Empty Fishing" to regain his two Pendulum Monsters and used them to save his friends from falling. He then Pendulum Summoned "Entermate Kaleido Scorpion", "Entermate Tiptoad", and "Odd-Eyes Pendulum Dragon" and defeated Shingo with them. After losing to Yuya, Shingo sent his friends to take back "Timegazer Magician" and "Stargazer Magician", but they were intercepted by a boy named Sora Shiun'in, who knocked them unconscious with his lollipop stick and declared himself as Yuya's apprentice. 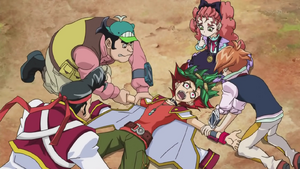 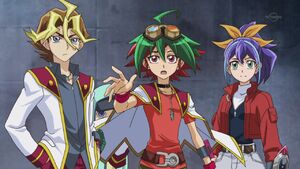 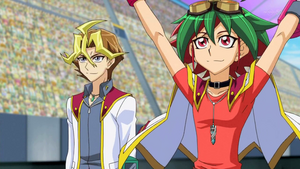 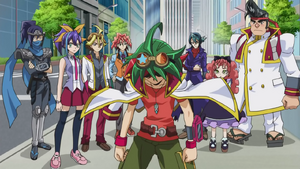 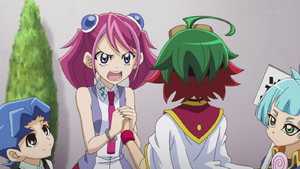 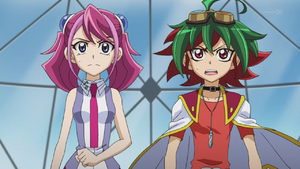 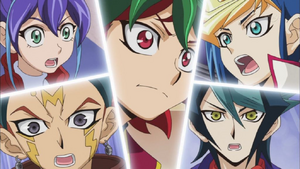 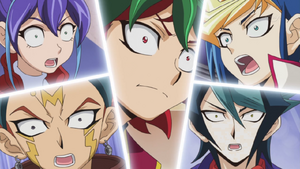 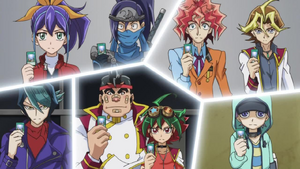 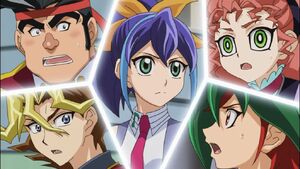