Sibling
Yuzu Kurosaki is one of the main supporting characters of the Bleach manga and anime series. She is the daughter of Isshin Kurosaki and the late Masaki Kurosaki, the younger sister of Ichigo Kurosaki, and the older twin sister of Karin Kurosaki.

In addition to being Isshin's and Masaki's daughter, Ichigo's younger sister, and Karin's twin sister, she is also the sister-in-law of Orihime Inoue, and the paternal aunt of Kazui Kurosaki.

She and Karin were both born on May 6. Despite their differences, the sisters are quite close to each other and they both grew up into a very good natured family with a cheerful mother, a humorous father, and a protective brother and both attend school together. After the death of their mother, the girls became assistant nurses to their father and became helpers around the house. As the storyline starts to progress, the girls gained the ability to see ghosts and even gain some powers to protect those around them.

She has her mother's honey brown hair that was very short and keep in hair clips that are sometimes shaped in fruits like strawberries, apples, oranges and flowers. During the timeskip, her hair is shoulder length and she will sometimes wear her hair in pigtails. According to Ichigo, Yuzu is the mother of the house, and after her mother's death she would take the role in cleaning, doing chores, and cook for the family. Yuzu is a very sweet girl, but she can sometimes be strict in making sure everything is in order and she dislikes violence. 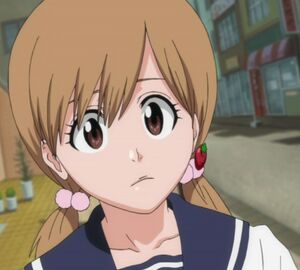 Retrieved from "https://hero.fandom.com/wiki/Yuzu_Kurosaki?oldid=2156669"
Community content is available under CC-BY-SA unless otherwise noted.