To defend Earth from major threats and to protect the seven mystical Dragon Balls from the hands of evil.

Martial Artists
Warriors
The Z-Fighters (Ｚ戦士, Zetto Senshi; also known as the Z-Warriors, Earth's Special Forces or, as Mr. Satan calls them, the Gold Fighters) are a small group of warriors located on Earth. Their duty is to defend Earth from major threats and to protect the seven mystical Dragon Balls from the hands of evil. Goku is the de-facto leader of the group due to his incredible success rate against villains in the Dragon Ball franchise such as the Red Ribbon Army, King Piccolo and Frieza. Over time, the group consistently bolstered its ranks through the addition of former enemies and new heroes and routinely overcame seemingly insurmountable opponents, always emerging victorious against progressively more powerful foes.

A similar team already existed in the Dragon Ball anime, the Dragon Ball Gang. Their original purpose for coming together was not to protect the Dragon Balls, but to use them themselves. Typically, this brought the group into conflict with a host of villainous characters who sought to use the Dragon Balls for their own selfish desires, whereas the Dragon Ball Gang desired the balls for good. This included evils such as Emperor Pilaf and the Red Ribbon Army. The team that could be considered an early rendition of the Z-Fighters was formed mainly in response to the threat posed by Demon King Piccolo and his sons in the final story arc of Dragon Ball. Its members consisted of Goku, Krillin, Yamcha, Tien Shinhan, Chiaotzu, Yajirobe and their allies.

The first actual formation of the Z-Fighters was out of necessity, brought on when Goku was faced with Raditz, who had kidnapped his young son Gohan and wanted to destroy the Earth. Goku formed an alliance with his arch-rival Piccolo in order to fight for a common cause. The team-up is considered the true birth of the Z-Fighters.

The term itself is very rarely used in the series by anyone other than the narrator, the first being in the Androids Saga, when Future Trunks explains to Goku that in the future, "the Earth's Special Forces are gone". The second character to use the term was Gohan when he was training in the Hyperbolic Time Chamber to defeat Cell. While sleeping, he had a dream in which his mother Chi-Chi said she did not want Gohan to be in Goku's little gang. Gohan then responds that he is not in a little gang, he is a Z-Fighter.

The battle against the Saiyans, Vegeta and Nappa, is commonly considered the first time the Z-Fighters engaged enemies together. After Goku's death against Raditz, Piccolo trained Gohan to prepare for the arrival of the Saiyan warriors. Though several of the members expressed distrust of their former enemy Piccolo, this first Z-Fighter roster consisted of Goku, his inexperienced son Gohan, Piccolo, Tien Shinhan, Krillin, Yamcha, and Chiaotzu. Yajirobe, though choosing not to join the fight, ended up playing an important role in repelling Vegeta by slicing off the Saiyan's tail, saving Goku's life. Unfortunately, the Z-Fighters were decimated in the battle against Nappa and his Saibamen, with only Goku, Krillin, Gohan, and Yajirobe surviving the fight. The deceased would train in Other World with King Kai like Goku, while the survivors (sans Yajirobe) headed to Namek with Bulma to find the Namekian Dragon Balls and revive their fallen comrades.

During the battle on Namek, the Z-Fighters would ally themselves with the Namekian race against Frieza and his Planet Trade Organization. This part of the series marked a turning point for the group, as Piccolo fully reformed and they began working with Vegeta, if only out of necessity in the fight against Frieza. This is also the first time in the series in which a character actually refers to the group as the Z-Fighters, when Gohan pleads with Chi-Chi to be allowed to go to Namek with Krillin and Bulma. He informs her that he too is a Z-Fighter, and must be there to protect his friends.

Battle against the Androids and Cell

It was not until the Androids Saga some four years after the battle on Namek that the the Z-Fighters came full circle. Goku returns from space one year after defeating Frieza, while Future Trunks comes from the future to warn everyone about the Androids that have caused apocalyptic mayhem in his time. After his defeat on Earth and brief alliance with the Z-Fighters on Namek, Vegeta decides to return and remain on Earth in anticipation for Goku's return in the hopes that he would be ready to challenge his rival once again. When Future Trunks reveals the future, Vegeta decides to stay and train for the upcoming conflict with the androids rather than prepare to battle Goku, though like previously with Piccolo, most of the other Z-Fighters do not fully trust him and are unwilling to consider him a true ally. Krillin, Yamcha, Tien Shinhan, and Chiaotzu, who were wished back to life, also begin training for the fight with the androids. It is evidently around this time that the series refers to the group of warriors as the "Z-Fighters". When the androids do arrive, Future Trunks returns as well, bolstering the team's ranks. With Goku, Gohan, Piccolo, Krillin, Yamcha, Tien Shinhan, Chiaotzu, Vegeta, and Future Trunks, the group fully forms and it is shown through the opening sequence at this time in the series (the final image is of the aforementioned fighters and Goku as he transforms into a Super Saiyan).

It is also worth noting that, while this version of the Z-Fighters is a prominent one during the series' history, it is the only period of time in which the team consists of these certain members, the largest roster of the Z-Fighters. By the end of the Cell Games, Gohan has become the new protector of Earth following Goku's death at the hands of Cell. Future Trunks returns to his timeline more powerful than ever, thanks to his training in the Hyperbolic Time Chamber with Vegeta, and proceeds to finally destroy the evil versions of Androids 17 and 18 in his world, as well as his timeline's Cell a while later.

Meanwhile, Tien Shinhan bids farewell to the Z-Fighters and plans to live in seclusion with his best friend Chiaotzu, realizing he can no longer compete with the power of the Super Saiyans. Yamcha retires from fighting for the same reasons as Tien. Krillin continues to live with Master Roshi, and after a few years, eventually reunites with and later marries Android 18. They soon have a daughter named Marron, and thus Krillin stops training as well. Piccolo decides to live with Dende and Mr. Popo on Kami's Lookout, continuing to train and meditate there. Vegeta continues to train hard too, hoping to become a Super Saiyan 2 like Gohan, but declares that he will never fight again with his only rival, Goku, dead. Finally, Gohan keeps his promise to his mother Chi-Chi and gives up fighting to study and become a scholar.

By the beginning of the Majin Buu Saga seven years later, the Z-Fighters consists of many "next-gen" type of characters. Gohan is eighteen and is the primary hero of Earth, both as a Super Saiyan and his alter-ego "The Great Saiyaman". The Z-Fighters are not really continued, per se, based on the fact that their opponent Majin Buu was so powerful, it mainly called upon one single person to fight him. However, considering the fighters in this time period, it can be said that the new Z-Fighters consist of the following: Goku, Gohan, Piccolo, Vegeta, Trunks, and Goten. Also worth noting is that, unlike the Androids Saga, the Majin Buu Saga is when Vegeta voluntarily became a hero. He fought for his family and to save the Earth, even sacrificing himself in an attempt to kill Majin Buu. He also later came up with the idea of Goku using a Super Spirit Bomb that defeated Kid Buu at the very end.

A short while later, the Z-Fighters Goku, Vegeta, Goten, Trunks, and Gohan fight against the monster Hirudegarn. Later, they battle Abo and Kado, as well as their fusion, Aka. In the same time period, the Z-Fighters battle the God of Destruction Beerus.

Later, Krillin and Tien come out of retirement to help their fellow Z-Fighters as part of Universe 7's team in the Tournament of Power, with Android 17 also becoming an official Z-Fighter.

During Dragon Ball GT, the main fighters for the most part tend to be Goku, Trunks and Gohan's daughter Pan. Uub does fight in the first major arc, the Baby Saga. However, the Z-Fighters (or GT-Fighters) come together once again in the Super 17 Saga. While Goku is trapped in Hell, Android 17 murders Krillin in front of Android 18 and Marron. This forces the hands of the last major, briefly-retired fighters from the end of Dragon Ball Z, and they reunite to destroy 17. When the Shadow Dragons appear, Goku manages to defeat most of them, only to finally be outmatched by Syn Shenron, who later becomes Omega Shenron. Vegeta arrives and, with Bulma's help, transforms into a Super Saiyan 4 himself, allowing him and Goku to fuse into Super Saiyan 4 Gogeta. Their fusion eventually wears off, and Goku seemingly sacrifices himself to stop Omega from destroying the Earth. The final effort of the warrior team is against Omega, in which Vegeta, Gohan, Trunks and Goten attempt to fight him, but all of them fail miserably. Before Omega can use his ultimate attack to wipe out the entire universe, Goku returns and kills Omega with a Universal Spirit Bomb. Goku later leaves with Shenron, thus ending the team forever.

In the online MMO Dragon Ball Online, Goku left Earth for different reasons than in GT, and Majin Buu created the Majin race. Much of the final activity of the Z-Fighters is fleshed out: Gohan wrote a book about ki manipulation titled "Groundbreaking Science", Krillin founded the New Turtle School, Tien Shinhan founded the New Crane School, and Trunks and Goten created the Kikoukenjutsu Sword School.

100 years after the Shadow Dragons' defeat, only Pan is still alive. The rest of the Z-Fighters and their friends have since passed away, with two new warriors, Goku Jr. and Vegeta Jr. (the great-great grandsons of the original Z-Fighters of the same names), carrying on their legacy.

In Future Trunks's Alternate Timeline, Future Goku died from a deadly heart virus six months before the arrival of the androids. He could not be wished back, since the Dragon Balls cannot revive anyone who died from natural causes. When the androids did arrive, they proceeded to slaughter Piccolo, Vegeta, Tien Shinhan, Yamcha, Krillin, and Chiaotzu in a horrible battle. Future Gohan somehow managed to survive, only to be killed thirteen years later. The only surviving fighter was Future Trunks, who traveled back in time in an attempt, not to change history (as the manipulation of the past would only cause that timeline to take a different path, creating an alternate, separate future), but to see if Goku could help him find a weakness in the Androids; that way, although he could do nothing for those already dead (with Piccolo gone, so were the Dragon Balls), he could still save those who were still alive. After the defeat of Cell, Future Trunks returned to his own timeline and was successful in killing both of the androids and Future Cell, thus finally ending the nightmare that he and his timeline has endured for so long. 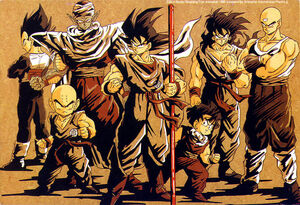 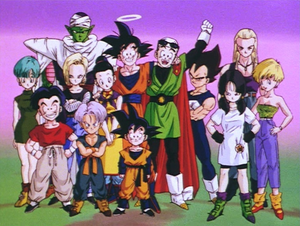 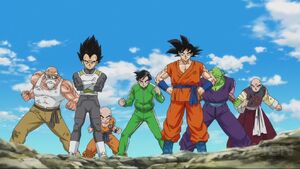 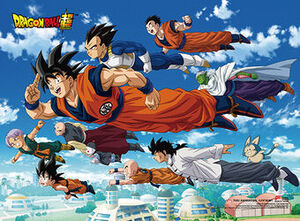 The Z-Fighters in Dragon Ball Super

The Z-Fighters alongside Jaco as part of the Galactic Patrol 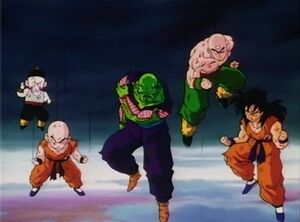 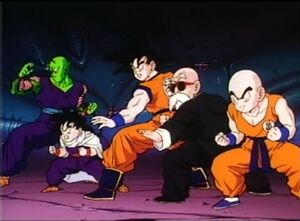 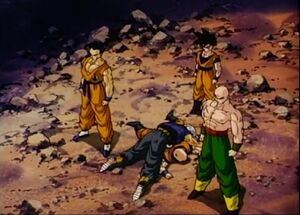 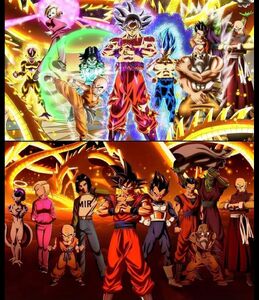 Z-Fighters and Frieza in the Tournament of Power