Lone Wanderer
Z.W.E.I. (ツヴァイ, Tsuvai) is a character in the 6th installment of the Soul series, Soul Calibur V. He is a dark and brooding man who wields an arming sword with three handles and can summon a lupine being called E.I.N. during battle.

His real name is unknown, cause no one actually knows what it is.

People mention him as a werewolf. Some swore they'd seen him summon a strange beast to fight by his side. Others claimed corpses were found in every city he left behind...

In truth, Z.W.E.I. was a hunted man, on the run from assassins sent by Graf Dumas of Hungary. He had dared to interfere with Dumas' purge of the malfested, a witch hunt that falsely accused and executed innocent people.

But Z.W.E.I.'s life was about to change. He rescued a fortune teller named Viola who possessed inhuman powers like his own, and the pair became traveling companions. Continuing his journey while protecting Viola from Dumas' assassins proved difficult, but Siegfried found the two fugitives and took them in under his protection.

At the start of Soul Calibur V, he encountered Patroklos and managed to beat him to save a possible malfested he was trying to kill.

Z.W.E.I. appears again to aid Patroklos in finding his sister, despite his warning that they could not be together. In the 18th chapter, he fights and defeats Nightmare (Graf Dumas). However, while his guard is down he is stabbed in the back by Pyrrha, who takes Dumas' place as the wielder of Soul Edge, and falls into the abyss which most likely destroyed him. 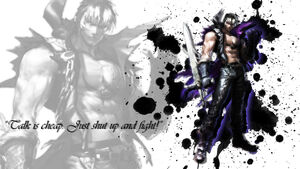 Z.W.E.I. Wallpaper
Add a photo to this gallery

Retrieved from "https://hero.fandom.com/wiki/Z.W.E.I?oldid=1908573"
Community content is available under CC-BY-SA unless otherwise noted.