Redeemed Pawn of the Villain
Zabuza Momochi (桃地再不斬, Momochi Zabuza), given the moniker Demon of the Hidden Mist (霧隠れの鬼人, Kirigakure no Kijin), was a missing-nin from Kirigakure's Seven Ninja Swordsmen of the Mist.

Zabuza was initially portrayed as aggressive, arrogant, cruel, cold and ambitious, willing to become Gatō's thug to gain enough funds to start a second coup d'etat on the Mizukage, and kill anyone who stood in his path, including plotting to kill Gatō once he had received enough funds from him. His reputation for cruelty and ruthlessness began as a child where he killed every single candidate in Kirigakure's Academy, earning him the moniker of "Demon of the Hidden Mist" (霧隠れの鬼人, Kirigakure no Kijin). He willingly uses his own men and others as pawns to fulfil his ambitions, as he raised Haku to be an efficient tool to be discarded when he had no use to exploit; although unlike future antagonists, he was blunt about the purpose that his recruits were needed for, forgoing any form of manipulation by pretending to be benevolent to inspire loyalty. This corresponds with his cynical view of the world, which only consists of the used and the users, as well as viewing shinobi to be nothing more than tools.

Zabuza was a tall and noticeably muscular man with pale skin, short spiky black hair, brown eyes, and small eyebrows. He was normally seen wearing bandages like a mask over the bottom half of his face. Under his mask, he had a relatively narrow jawline and jagged-teeth, a trait he shared with his fellow Swordsmen. He wore his forehead protector sideways on his head, and prior to his defection from Kirigakure, donned the village's Anbu uniform and flak jacket. After his defection, and during his first appearance, he was seen shirtless, with his chest only covered by a belt to which he attached his Kubikiribōchō, wearing baggy pants with the striped pattern typical of Kirigakure and mimetic wrist-warmers extending up to his elbows, with matching leg-warmers. 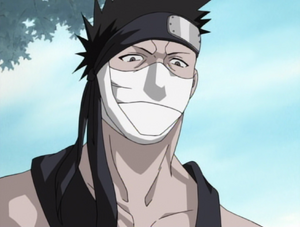 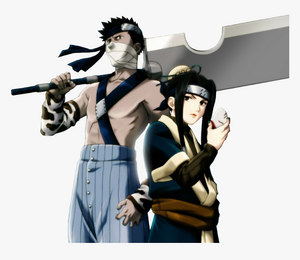 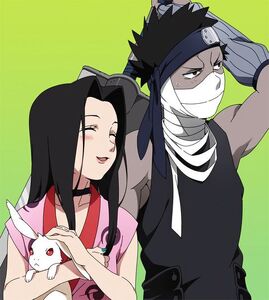 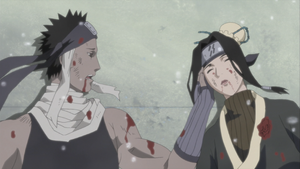 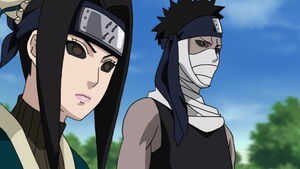