Hanging out with Champ.

To get R.L. Stine's creatures back in the books.

Zach Cooper is the main protagonist of the 2015 thriller/comedy film Goosebumps based on the Goosebumps novels by (the real) R.L. Stine.

Zach is portrayed by Dylan Minnette, who also portrays Donnie Gill in Agents of S.H.I.E.L.D., Anthony Cooper in Alexander and the Terrible, Horrible, No Good, Very Bad Day, and Clay Jensen in 13 Reasons Why.

He is the person who is the next door neighbor to R.L. Stine who accidentally opens the books and releases The Monsters. Now Zach, Stine, Hannah and Champ are going to get the monsters back.

Zach and his mother Gale were moving to Madison, Delaware. Their house was right next door to R.L. Stine going by an Incognito Name "Mr. Shivers", and Hannah Stine (His adopted daughter, and protagonist from "The Ghost Next Door"). Zach then meets a new friend named Champ where he gives Zach his card to call him in case of Emergencies. Zach was hearing "Shivers" and Hannah argue and Zach calls the cops to check out Stine's house. Zach was supposed to stay with his aunt Lorraine but he snuck outside and called Champ to help him find Hannah. But Hannah seems to find them first. Zach and Champ come across Stine's books. Champ talks about one of the books in particular ("The Abominable Snowman of Pasadena"). When Zach opened the book with the key the Abominable Snowman was released. He Knocked down all of the books. including the one with the main villain, Slappy the Dummy (from "Night of the Living Dummy") Zach, Champ and Hannah followed the snowman into the Ice Rink. They got trapped until Stine opened the book and put the snowman back in his place (get it?).

Stine was driving him and Champ home. Slappy appears in front of them sitting in Stine's Chair. Slappy releases the rest of the creatures, Burns their books and drives a car (with a license plate that says "haunted") while Zach and the others were looking for Slappy Zach Notices Hannah as a Ghost. Zach thought Hannah doesn't know. Slappy and the Monsters were trying to get rid of R.L. Stine. Stine got taken by a Gelatin Monster (a.k.a "The Blob that Ate Everyone") Zach was finishing the rest of the story, if he did all of the monsters (Including Hannah) will go back into the book. Hannah dropped the book and all of the monsters went back in the book. At the end of the movie Stine became Zach's Teacher and Stine Dated Zach's aunt Lorraine. Stine wrote another book that brought Hannah Back. The Movie ends with the Invisible boy (Brent Green) typing "The Invisible Boy's Revenge" (a non-goosebumps novel). 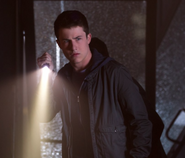 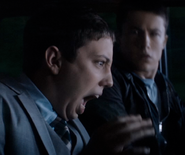