Resting in the Slumbering Wield

Possibly Each other (siblings)

Zacian and Zamazenta, also know as The Heroes of Many Battles, are the Mascot Legendaries of Pokémon Sword and Shield. They are the guardians of the Galar Region, who according to the legends protect Galar from outside threats before they faded into myths.

20,000 years ago, a meteorite containing the Pokémon Eternatus crash landed on the Galar region. Eternatus nearly destroyed the Galar region absorbing all the energy on it's path, until it was defeated by Zacian and Zamazenta, who used their powerful sword and shield to fend off the dangerous alien. The two Legendary Pokémon suffered grave injuries during the battle, including both of them missing a piece of their ear and their armors completely breaking down, leaving them in a significantly weakened state. After the battle Zacian and Zamazenta retreated to the Slumbering Weald to rest. The sword and shield that Zacian and Zamazenta used during the battle were left in an altar next to their resting place. It is implied that Zacian and Zamazenta passed away while their spirits remained in the altar looking after their old weaponry.

Over the generations, the battle of Zacian and Zamazenta faded into myths while Eternatus came to be known as "The Darkest Day in Galar". The energy that Eternatus radiated during that battle was harnessed by the people of Galar, leading to the discovery of Dynamaxing. Over time the myth of Zacian and Zamazenta was continously misconstructed, eventually the two Pokémon were omitted from the myth and instead it was told that a "human hero" defeated "The Darkest Day" with a sword and a shield, only a statue depicting Zacian and Zamazenta remained in the area that would eventually become the town of Stow-on-Side. However, the statue was buried behind a mural depicting the incorrect myth. The Slumbering Weald became a forbidden place for humans to venture into, with a dense fog produced by the spirits of Zacian and Zamazenta scaring off visitors. It was rumored that "an extremely dangerous Pokémon" resided within the Slumbering Weald, further discouraging people from entering the forest.

The existence of Zacian and Zamazenta was all but forgotten as the Slumbering Weald was considered too dangerous for anyone to go into.

In the present day, two trainers named Victor/Gloria (depending on the player's gender) and Hop ventured into the Slumbering Weald looking for a stray Wooloo that sneaked into the forest. The two trainers soon got lost in the dense fog and stumbled into the spirit of Zacian/Zamazenta (depending on the version of the game). Victor/Gloria attempted to battle Zacian/Zamazenta but none of their attacks could harm it while the Legendary Pokémon made the fog thicker until the two trainers passed out. Hop's older brother Leon found the two unconscious and helped them exit the forest after he found the missing Wooloo.

The following day Hop and Victor/Gloria told Professor Magnolia about the incident. The professor instructed her granddaughter Sonia to investigate the myths of Galar to find out more. Throughout Victor/Gloria and Hop's journeys across the region they would frequently meet up with Sonia as she slowly discovered more about the legend of the "Darkest Day" and realized that the myths as they were told in modern times were incorrect after finding the lost statue of Zacian and Zamazenta.

During the finals of the League Championship, Chairman Rose revived Eternatus in an attempt to harness its energy to prevent a future energy crisis from impacting the Galar region. However his organization, the Macro Cosmos, was widely unprepared to handle Eternatus and it soon escaped. Rose interrupted the finals to announce that Eternatus was once again attempting to destroy Galar. Hop suggested going back to the Slumbering Weald and find Zacian and Zamazenta knowing that they defeated Eternatus before.

Not long after the battle against Eternatus and Victor/Gloria became the new champion, Sonia published a book detailing the true legend of Zacian and Zamazenta. This book angered Sordward and Shielbert, two descendants of the ancient Galarian royal family who believed themselves to be the real heroes of Galar. The siblings plotted to steal the Rusted Sword and Shield and large amount of Dynamax energy in order to create a rampage of Dynamaxed Pokemon to cause chaos and blame it on Zacian and Zamazenta by also corrupting them with forced Dynamax energy.

Victor/Gloria, Hop, and Piers all joined together to thwart Sordward and Shielbert's schemes, which ended with Victor/Gloria and Hop catching both Zacian and Zamazenta after bonding with them. Which of the two Legendary Pokémon Victor/Gloria catches depends on the version of the game.

In-game, Zacian and Zamazenta normally remain in their weakened forms but can change into their full armored forms by giving them the Rusted Sword/Shield respectively. 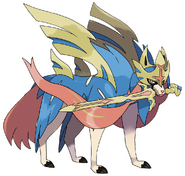 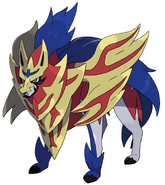