Training
Going out on dates with Aerith
Visiting Aerith

Zack Fair is a minor character in Final Fantasy VII and the second wielder of the Buster Sword before Cloud Strife. Zack received the Buster Sword from his mentor, Angeal Hewley. Zack is a First Class SOLDIER and was Cloud's closest friend during their time working for the Shinra Electric Power Company.

His personality and backstory is expanded upon in the Compilation of Final Fantasy VII, appearing as the protagonist of Crisis Core, a supporting character in Before Crisis, and a minor character in Advent Children and the Remake.

Outside of the series' continuity, Zack appears as a playable character in Ehrgeiz and a minor character in Kingdom Hearts Birth by Sleep.

Zack is tall, well-built, and has the iconic sky-blue "Mako eyes" many SOLDIER members have. Zack's appearance goes through a series of changes throughout Crisis Core -Final Fantasy VII-. He starts with spiky black hair and having several bangs framing the sides of his face. At first, he wears a dark blue SOLDIER uniform, gloves, boots, and is equipped with a standard SOLDIER sword, even if most 2nd Class members of SOLDIER wear red and magenta uniforms. Later, he is upgraded to a black 1st Class SOLDIER uniform. Later, Zack obtains the Buster Sword as well as an X-shaped scar on his lower left cheek and his spiky hair become longer and wilder with a lock of hair hanging down in front of his face. He has a silver earring in his left ear.

Zack has a positive attitude and is always ready for work. His energetic personality and low attention span earned the nickname "Zack the Puppy" from Angeal. He is loyal to SOLDIER and dreams of becoming a hero. He is sociable and easily befriends almost everyone. Angeal's words of valuing dreams and honor have had a great impact on Zack and he goes on to become SOLDIER's spiritual leader after his mentor. Despite his loyalty to Shinra, Zack ultimately stays true to his morals and heart: He refuses to kill Genesis and Angeal despite Shinra's order, which earns him Sephiroth's respect and friendship, and tries to reach out to them and is devastated over having to kill Angeal with his own hands. Zack even continues to appeal to Genesis's SOLDIER pride and honor and is ultimately successful, earning Genesis's respect. Zack's courage and morality can at times make him more serious and even ruthless, as after Sephiroth destroyed Nibelheim, Zack lost all hope for Sephiroth and did not hesitate to confront and try to kill him, despite knowing fully well of Sephiroth's skill that could very well and did indeed outmatch his. Years of experiment under Shinra finally broke Zack's loyalty. He is flirty with women and protective of his friends.

Zack was born in the town of Gongaga, where he lived until he left to join Shinra's elite militant force, SOLDIER. He eventually fell in love with Aeris Gainsborough after falling into the slums. While on the hunt for the rogue SOLDIER Genesis, Zack is promoted to SOLDIER 1st Class a short time before defeating his former mentor and original owner of the Buster Sword, Angeal, who passes the sword onto him while dying. Soon after, Zack went to Nibelheim to investigate the nearby Mako Reactor which had been malfunctioning. However, during the investigation, Sephiroth discovered the truth behind his origins and went on a rampage, destroying the Nibelheim village. Zack confronted Sephiroth in a duel only to be defeated. Following the battle, both he and Cloud were used by Hojo as test specimens. However, Zack managed to escape after four years and carried the incapacitated Cloud with him to freedom. The two were spotted riding the back of a truck headed to Midgar, with Zack putting Cloud in hiding as he fought the numerous Shinra Troops. After fighting several Shinra infantrymen and being shot multiple times, Zack dies with Cloud at his side. It is after this that Cloud takes Zack's words of him being his "living legacy" seriously, adopting Zack's personality traits, memories, even habitual gestures, as his own.

Zack's existence is initially unknown to Cloud due to the mako poisoning Cloud suffered from the experiments in Nibelheim. Throughout much of the adventure, Cloud's personality, actions, and even memories replicate Zack's without any knowledge that he exists. However, when Sephiroth confronts Cloud and tells him that not only is he not Zack, he is actually a failed clone of Sephiroth. When Cloud becomes incapacitated by another poisoning of mako, he goes through sequences in his mind where he becomes aware of Zack's existence, as well as his true history. Cloud learns that Zack saved him from the experiments in Nibelheim, and sacrificed his life in order to protect Cloud from the Shinra Military. Cloud accepts this revelation and moves forward to continue his quest to stop Sephiroth from summoning Meteor.

Cloud, having regained his memories of Zack, is left haunted and broken with guilt and grief over his failure to save him and Aerith, especially as he forgot about Zack and didn't even get to save Zack's beloved. He has placed Zack's Buster Sword on a cliff outside of Midgar, the location where he was killed by the Shinra Military. At the end of the movie, Zack is shown standing at the doorway of the Sector 5 Slum's Church with Aeris, letting Cloud know that everything is alright now.

Zack plays a slightly larger role in the extended cut of the film known as Advent Children Complete. During the final battle with Sephiroth, which has been revised from its original version, Zack appears just as it seems that Cloud is about to lose. He asks Cloud if he needs any help before assuring him that he can win, because "You've beaten him before. This should be cinch!" He reassures Cloud that he is still worthy of being his legacy as Cloud in return promises Zack he won't forget that he is anymore.

Having been trained by Angeal, one of the three most powerful SOLDIER members, Zack is an exceptional combatant, proficient in both swordsmanship and hand-to-hand combat, and holding superhuman physical prowess from being enhanced by Mako. He is considered a cut above most Second Class SOLDIER members and secures a promotion to First Class and his skill only continued to grow over the years. A true testament to Zack's prowess in combat was how he has fought all three of the most powerful SOLDIER First Class, his growth displayed by his victory over Genesis not only when he was degrading but ultimately even after Genesis was cured. Although Zack only defeated Angeal Penance and not Angeal himself, he easily fended off Angeal's assault while holding back. While Zack is ultimately bested by Sephiroth, who is considered the best SOLDIER member of all time, Hojo noted that the amount of strength Sephiroth used to defeat him was significant. In his last stand, Zack faces an endless horde of Shinra infantrymen and persists for an impressive length of time.

Although relying on melee combat more, Zack has mastered the use of Materia. With Digital Mind Wave as his Limit Break, he can copy skills upon seeing them used by others. Outside the realm of battle, Zack is great at performing squats and has the potential to set a record for this within Shinra. Calling himself a "country boy," traversing a snowy mountainside will not slow him down compared to his more inexperienced companions. He has also displayed some handyman skill by building Aerith a flower cart. 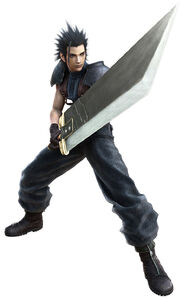 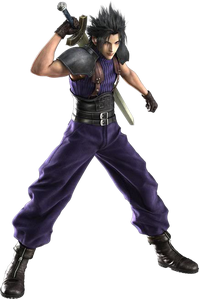 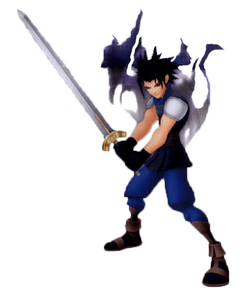 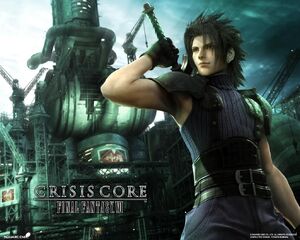 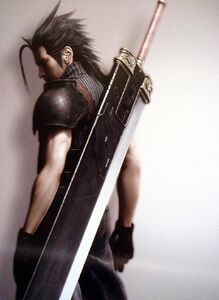 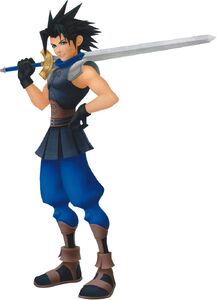 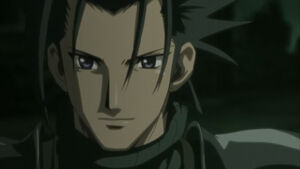 Last Order Appearance
Add a photo to this gallery

Retrieved from "https://hero.fandom.com/wiki/Zack_Fair?oldid=2025363"
Community content is available under CC-BY-SA unless otherwise noted.