Cossack dancing, taking care of children, looking up to his fans

To honor his name in wrestling

Shadaloo
Whoever and whatever that threatens or undermines Russia's national safety

Zangief (Russian: Зангиев, Zangiyev; also known as the "Red Cyclone") is a video game character created by Capcom. He is part of the Street Fighter series of fighting games, first starring in Street Fighter II. He is a national Russian hero who is always seen fighting for the glory of his country.

He was voiced by Michael Donovan, who was voicing Spike from Tom and Jerry Tales.

Zangief is a Russian wrestler known as "The Red Cyclone". He impressed the president of the (then) USSR, Gorbachev, so much that he was hired by the government and soon became a national hero. Under orders from Gorbachev, Zangief was sent to combat the forces of Shadaloo, which is beginning to spread its corruption into Russia. Zangief encountered many fighters along the way, and ended up befriending a few of them, such as E. Honda and R. Mika.

After he was defeated in the second World Warrior Tournament, he returned to training in the Russian wilderness, wrestling bears. Eventually, he was approached by the largest wrestling organization in the world with an eye to signing the "Red Cyclone" to their promotion. Zangief declined at first, and said that he is less interested in money than he is in bringing honor to Russia by demonstrating Russian strength. He is promised a stage to better showcase his skills, with his matches watched by millions. Due to the obvious help this will bring to his will to show Russian strength, Zangief accepted. Years later, Zangief entered the World Tournament held by S.I.N. to prove to his young fans (some of whom are beginning to claim that martial artists are better) that he's still got it.

Zangief is a massive fighter, weighing 400 lbs and standing slightly over 7 feet tall, placing him among the tallest characters in the entire Street Fighter roster. Since his debut in Street Fighter II: The World Warrior in 1991, Zangief has been portrayed with a beard and a mohawk, along with a uniquely-shaped formation of chest hair on his torso and on his shins. His massive frame is almost entirely covered in scars from his bouts with brown bears in the barren and remote area of Siberia.

Zangief's wardrobe consists of simple red wrestling trunks with a gold belt, along with red and gold wristbands and his red wrestling boots. In one of Zangief's concept artworks, he wore a tank top and had a sailor anchor tattoo on his left arm. He would retain the tank top in all his Street Fighter II portraits (except Turbo Revival and HD Remix), in order to indicate what color the player chose for him.

Starting with Street Fighter Alpha 2, Zangief was adorned with a red cloak that he would remove before starting his matches. The cloak became an accepted fixture of his image, and he was shown with it in the 1994 Street Fighter II animated movie. Although modern 3D interpretations of Zangief have so far not shown him with his cloak, he is still depicted as wearing it before matches in his ending movie on Super Street Fighter IV.

Born and raised in the Soviet Union, Zangief is an incredibly patriotic character who has been motivated in some way to fight for his Motherland in every single game he has ever been in. Street Fighter II: The World Warrior depicted that Zangief was from the U.S.S.R. when the game was released in February, 1991. The Soviet Union would cease to exist the following December, but due to the heavy use of Soviet iconography in and around Zangief's character, including his home stage (an iron plant complete with a giant hammer and sickle logo imprinted on the floor), Zangief was depicted as being from the U.S.S.R. as late as 1998, when Street Fighter Alpha 3 was released (though justifiably, the Alpha series takes place between the first and second games, meaning the U.S.S.R. still existed as of then). Street Fighter IV was the first time Zangief was depicted as being from the Russian Federation in 2008.

Zangief's personality has varied from one media source to another, but he is mostly been portrayed as a very fearless and tactical fighter who is prone to quick temperaments, and is always very competitive. Zangief is a man who is immensely proud of his physique, and constantly belittles his opponent's smaller muscular build and blaming their losses on their smaller physique. Despite his short temper, Zangief has shown himself to be rather gentle-natured with a good sense of humor at times, once entering a tournament partly to win the admiration of a group of school children. According to the instruction manual of Street Fighter II: Special Championship Edition for the Sega Genesis/Mega-Drive, Zangief is described as being "good natured, with a great sense of humor, and totally fearless."

Zangief can be easily misled by his overwhelming sense of patriotism for his home country. In Street Fighter Alpha 2, it was revealed that the President wants Zangief to train and fight around the world primarily to boost his own prestige abroad, although Zangief fails to realize this and continues to fight for the glory and honor of Russia, no matter what the reason may be. 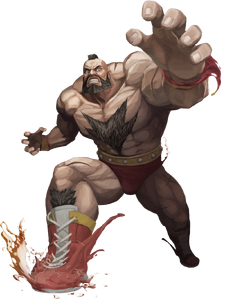 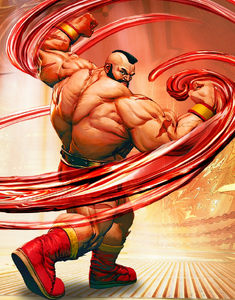 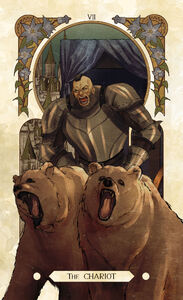 Zangief on a tarot card (courtesy of Capcom artwork collection)