Assisting
Willingness
Loyalty and devotion to her boss Claire Dearing

Get things ready for her wedding.

Zara Young is a supporting protagonist in Jurassic World. She is portrayed by Katie McGrath.

Claire put Zara in charge of her nephews because she is loyal and excellent worker unfortunately she is not a good multitasker. This is show when she was on her phone trying to get things for her wedding and trying to look out for the boys at the same time. Even though Zara spent more time worrying about her wedding instead of the two brothers Zara does care about them as she is heard on the phone panicky about losing them.

Zach and Gray ditching Zara was wrong but they wanted to spend some time with Claire they really wanted family time instead. Zara at first didn't want to watch the boys because she was already worrying about her wedding. Zara would have been upset about them running off but also felt that she should done a better job at multitasking her wedding and the boys.

Zara began working at Jurassic World sometime in 2010 where she became the personal assistant for Claire Dearing, the senior assets manager for the park. At some point, she became engaged to a man called Alec.

Zara was assigned to look after Claire's nephews, Zach and Gray, while they were visiting Jurassic World, picking them up as soon as they arrived on the island, though she was not very enthusiastic about it. She accompanied the boys when they entered the Innovation Center inside the center the boys meet up with their aunt who tells the boys that she busy to take some time and that Zara will be taking care of them all day. She tried to plan a schedule to spend some time with the boys but than Zara reminds Claire of something else that she has to do. With their aunt Claire working Zara takes them on their tour of the park. While they're at the Gentle Giants Petting Zoo, Zara is seen being busy on her phone, going over her wedding details. The Mitchell brothers took advantage of this and ditched her to explore the park on their own. Given afterward, the Indominus rex broke free and put the park into an emergency situation. Claire called Zara, only for the distressed assistant to say the boys "had ran away". Eventually she reencountered the boys in Main Street, shortly before the Jurassic World Aviary's inhabitants invaded the area.

During the attack, Zara was snatched by a Pteranodon and gets savagely tossed amongst other Pteranodons in the air before being dropped into the Mosasaurus containment tank where she was brutally thrashed about and injured by several Pteranodons who continued to grab at her. When one of the Pteranodons tried to grab her again, the Mosasaurus emerged out of the water; devoured the pterosaur and Zara with it.

In LEGO Jurassic World, her role is more or less same, though she and Claire was seen together when they picked up Zach and Gray upon their arrival at the park. After they have rendezvous with the boys, Claire asked Zara to handle their tour while returned to her own business.

When Zara was attacked by Pteranodons that resulting her being eaten by Mosy, the scene was made to be more comedic: Here, a Pteranodon tries to snatch her soda, but Zara's own strong grip on it unexpectedly caused the pterosaur carry her to the sky by accident with it. Unable to held it's grip any longer, the Pterosaur ultimately dropped them to Mosasaurus containment tank. Unlike in film, no other Pteranodons come to torture her that attracted Mosy's attention but instead, Zara was distracted by her soda that made her forgot that she was in Mosasaurus containment tank, resulting Mosy devoured her and lost her soda in process.

At the end of the game, it's revealed that Zara was devoured alongside other 3 Jurassic World staff and Indominus where they together, playing cards with not much things to do. 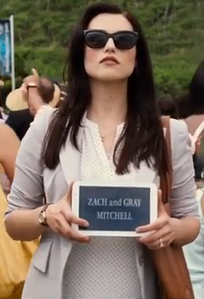