On the frozen world of Ilum, Zatt had to seek out his lightsaber crystal -- as per the tradition of The Gathering. Zatt had to learn to put aside his love of technology -- and the sensor unit he constantly fiddled with -- and rely on his own instincts to complete his quest.

A Force-sensitive Nautolan, Zatt was trained in the ways of the Force at the Coruscant Jedi Temple. When the Clone Wars erupted between the Galactic Republic and the Confederacy of Independent Systems, the Order's members were forced to serve in the Grand Army of the Republic. As the war was waged around them, Zatt was deemed to be one of the top members of his clan and suitable to travel to the sacred Jedi world of Ilum to participate in the ancient ritual known as The Gathering. Escorted to Ilum by Padawan Ahsoka Tano, Zatt and several other Initiates; Gungi, Byph, Ganodi, Petro, and Katooni met with Grand Master Yoda in the Temple at the mouth of the Crystal Caves.

Entering into the caves in search of a crystal for use in his personal lightsaber, Zatt was accompanied by fellow Initiate Katooni as he searched the labyrinthine caves. Coming across a massive icy cliff, Katooni was confident that her crystal lay at the top of the cliff. Leaving his friend to pursue his own crystal, the tech-savvy Zatt used a datapad enhanced with radar devices to search for his crystal. While the device detected several crystals all around him, he quickly became frustrated that it could not find his particular crystal. Angered, Zatt smashed the device on the wall, damaging its screen. After regaining his calm, Zatt realized the crystal he sought was on the other side of the wall and wired the malfunctioning device to detonate, to reveal the crystal. Able to free the crystal from the ice, Zatt claimed the crystal for himself and made it back out of the caves to await the other Initiates in the Temple. Master Yoda commended on him finding trust within himself.

After leaving Ilum, Zatt and the other younglings met Huyang, the lightsaber designer who would instruct him and the other initiates. While the younglings tried to use the force to create the lightsabers the Crucible was attacked by Hondo Ohnaka and his band of pirates. Before the Jedi ship could escape to hyperspace, Hondo boarded the Crucible. Without weapons the younglings were vulnerable, so they and Tano hid in the ventalation shaft. Zatt was ordered to go with Ganodi to secure the cockpit, and they succeeded with the help of R2-D2. Later the others got to safety with the help of Tano, who was captured. Without knowing she was not aboard Zatt jumped to hyperspace with his fellow younglings. Returning to the Crucible, Zatt constructed a green-bladed lightsaber.

Zatt was smart with technology, but he sometimes relied on it too much. He also walked around barefoot.

Zatt was a young Jedi Initiate and one of the top in his class. Zatt is capable of Telekinesis being able to make his lightsaber. He is also capable with a lightsaber striking down several battle droids, Zatt was also skilled with technology. 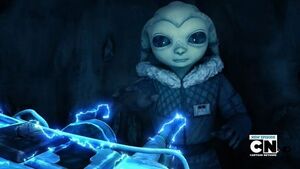 Zatt and his friends stand up to General Grievous 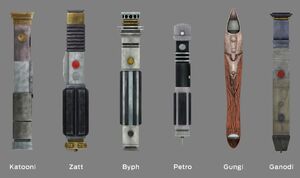 The various lightsabers possessed by the Young Jedi. Zatt's lightsaber is second from left.
Add a photo to this gallery
Retrieved from "https://hero.fandom.com/wiki/Zatt?oldid=1765323"
Community content is available under CC-BY-SA unless otherwise noted.