Spending time with and helping Dougal and the gang.

Defeat Buxton (succeeded).
Defeat Zeebad (failed, but the others succeeded).

Zébulon or Zebedee is a major character in The Magic Roundabout/ Le manège enchanté series as well as in Pathe's 2005 film adaptation of the same name and the subsequent US redub Doogal.

He is an immortal wise, wizard who has fire powers and a spring in replacement for his legs.

In the original French release of the 2005 film he was voiced by Élie Semoun and in both the English dub and Doogal he was voiced by Ian McKellen (who also played Gandalf in The Lord of the Rings and The Hobbit trilogies, Iorek Byrnison in His Dark Materials, Cogsworth in the 2017 adaptation of Beauty and the Beast and Older Magneto in the X-Men movies).

Before the events of the series and movie, Zebedee fought and imprisoned the evil ice sorcerer known as Zeebad who was his evil twin/counterpart. He later went to the magical garden and met Dougal and the other characters from the show many years later.

With there being no main conflict in the cartoon series Zebedee was only called upon whenever the gang needed assistance with something or if Dougal had caused trouble for anyone however he did appear frequently and was a fan favorite character. In Dougal and The Blue Cat he meets Buxton the Blue Cat and is one of the latter's victims. At the end of the movie after his defeat Buxton begs Zebedee and the others for their forgiveness which Zebedee agrees to.

Zebedee first appears in the movie having a nightmare about Zeebad in his strange limbo like home and wakes up shouting Zeebad's name. He then calms down upon realizing it was a nightmare and examines the village just to make sure he hadn't returned. After Dougal accidentally releases Zeebad from his prison, the gang call for Zebedee and he appears. Upon seeing the Magic Roundabout frozen by Zeebad who has escaped from there, Zebedee explains to the gang all about Zeebad before giving Dougal and the others instructions on how to defeat him and says that should they need assistance they should shout his name three times.

After the gang were cornered by Zeebad at his ice lair, they call for Zebedee and he appears where the two engage in an epic battle. This time however, Zebedee gets distracted upon seeing Sam The Soldier attacking the others when he should be on top of the roundabout, causing Zeebad to seize the moment and freeze Zebedee's arm, weakening his powers. He then fully freezes half of Zebedee's body and breaks the ice platform he's on top of, leading Zebedee to fall to his presumed demise.

After Zeebad's defeat, Zebedee is revealed to actually be alive and is broken free of the ice when it slowly begins to melt. He then returns to the village where he congratulates his friends on defeating Zeebad and revives Sam, putting him back on his original place on the roundabout.

Zebedee is a kind hearted man who gets along with everyone and never mocks or makes fun of anyone unlike his friends. He is also very eccentric and quirky and full of boundless energy. His sworn enemy is Zeebad and whenever he and Zeebad encounter Zebedee always takes him very seriously and leaps to the defense of others. 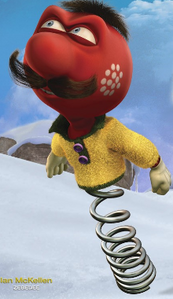