Zed (birth name Govos and later given the name Usan) also known as The Master of Shadows, is an anti-heroic playable champion in the multiplayer online battle arena game League of Legends.

Adopted by the Kinkou Order's leader Master Kusho, Zed trained alongside his master's son Shen. After the two were sent to investigate the crimes of serial killer Khada Jhin, Zed became disillusioned towards the Kinkou's teachings due to the inhumanity of Jhin's murders and the rising tensions between Ionia and Noxus. He later disbanded the Kinkou due to his resentment towards Kusho for refusing to stop Jhin and the Noxians, and formed the Yanléi Order, commonly known as the Shadow Order. While Zed has committed many crimes and betrayed the teachings of his master, he will do whatever it takes to see Ionia triumph.

The 107th champion released in the game, Zed was released on November 13, 2012. He is commonly played in the middle lane.

He is voiced by Donny Lucas, who also voices Boog in Open Season: Scared Silly. In the Japanese version, he is voiced by Kenjiro Tsuda.

At a young age, a boy named Govos was taken in by the Kinkou Order and given the adoptive name Usan. He was mentored by the legendary Kinkou leader Master Kusho alongside many of his apprentices, including Kusho's son Shen. Usan felt overshadowed by Shen's emotional balance, but he was very passionate in his techniques. Eventually, the two became good friends.

For many years, Kusho, Usan and Shen investigated a series of deaths by the "Golden Demon", a mysterious killer who had murdered people in twisted yet beautifying ways. The gruesome scenes had shaken the two apprentices to their cores, with Usan struggling with his studies from being traumatized by the murders. The apprentices later set a trap which caught the killer, whom turned out to be a masked performer named Khada Jhin.

Zed wanted to kill Jhin, but Kusho believed that Jhin representing the worst of humanity would undermine the pacifism and trust of Ionian culture, and might encourage others to perform similar crimes, so he decided to imprison Jhin in Tuula instead and Shen agreed. Usan was angered by how such an depraved criminal was given such a merciful punishment, and began to resent Kusho and the Kinkou Order.

One day, Usan entered the Temple of Thanjuul to find a black box, which caused shadows to envelop his mind. He developed a contempt for the weak and hints of a magical power. He came out of the temple to request Master Kusho to stop the Noxian forces from taking over Ionia, but he refused. Enraged by Kusho's complacency, Usan formed an army of followers to bring justice his way, giving himself the new name Zed.

They came for the black box that Zed had originally found in the temple, but Master Kusho tried to dissuade them. Zed and his followers slew most of the Kinkou guarding the temple and took the box. It contained the Shadow's Tears, an ichor which when ingested or tattooed onto the skin could grant the user the ability to control shadow magic. Using this power, Zed formed the Yanléi (meaning "tears") Order, also known as the Shadow Order.

Zed led the Shadow Order to participate in a war to defend Ionia from the Noxian armies, and eventually convinced Master Kusho to take part in the war. Kusho agreed to fake his death so that Shen would be left unaware of this defiance in Kinkou ideals and Zed's taboo actions. Shen was angered by his friend's killing of his father and master, but tried to keep himself calm so that he could rebuild the Kinkou and keep the balance, but despite this Zed came back to him to enlist his help in catching Jhin one more time, since he had escaped from his prison.

Unbeknownst to them, Master Kusho had formed the Navori Brotherhood to seize control of Ionia in his image, and released Jhin to spread terror amongst the Ionian people. Zed travelled with Shen and his acolyte Akali to Zaun to find Jhin, but Akali ended up being captured by him, only to be saved by Shen and Zed.

Later on, Zed found a Noxian child soldier named Kayn, recognizing him as a valuable ally with potential. He recruited Kayn into the Shadow Order and began treating him like a son to him. Kayn became determined to fulfil his master's goals and planned to be a master of shadow, but thanks to taking on the Darkin scythe known as Rhaast, he was manipulated to believe that he could even become stronger than Zed.

Though he did not reconcile with Shen and the remaining Kinkou, now scattered throughout the provinces, they reached an uneasy accord in the aftermath of the war. Zed knew what he had done could not be undone. In recent years, it has become clear that the balance of the First Lands has been disrupted, perhaps forever. For Zed, spiritual harmony holds little consequence—he will do what needs to be done to see Ionia triumph. 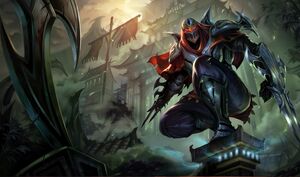 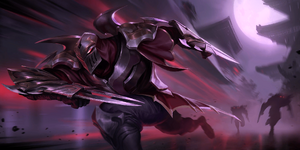 Zed's artwork in Legends of Runeterra. 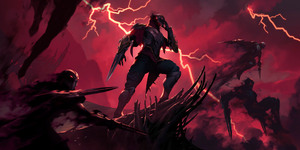 Zed's leveled up artwork in Legends of Runeterra.

Zed on League of Legends Wiki