Zed also known as Agent Z is a character from and head of the titular Men In Black. Prior to Zed as the head of the M.I.B. was Alpha but Alpha went mad with power and tried to use the organization for his own ends. After Alpha was forced to step down Zed took over and has runs the Men In Black, keeping them focused and running smoothly.

Like most agents, Zed keeps a stern demeanor and takes his job extreme seriously. Though serious about his work, he can take a joke and is willing to tolerate tomfoolery provided it does not actually affect an agent's performance. Zed is not only a seasoned agent but also a master diplomat and familiar with all forms of bureaucracy as well. Zed knows well how to make problems with the governments of the Earth go away and has enough friends in intergalactic places to smooth over most interstellar incidents. Reportedly Zed was once a prime field agent but years behind a desk have rendered him physically a little worse for ware.

Though he still can use a gum with the best of M.I.B. and is equipped to deal with occasional fire fights he has less physical endurance and martial dexterity than most active field agents. Zed knows the organization inside and out, every code, every secret corner and every nut, bolt and plasma generator in every single piece of equipment in M.I.B. 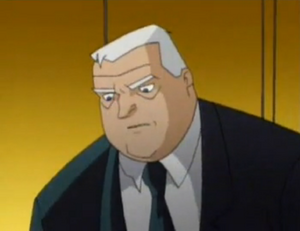 Zed as he appears in the animated series. 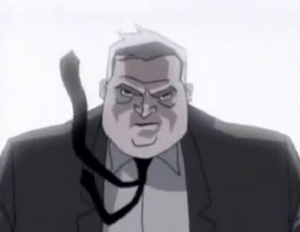