Zeitgeist is a supporting protagonist in the movie Deadpool 2. He is a member of X-Force. He was played by Bill Skarsgård.

Zeitgeist appears as one of the main members of X-Force who successfully passes the interview stage with Deadpool and Weasel when he tells them of his mutant ability, which is spit acidic vomit. After the team is briefed on the plan to rescue Russell from a prison transport, he is next seen on the cargo plane along with the rest of the X-Force ready to parachute into action.

Although Peter warns the team about the high winds and the danger it poses to a parachute insertion, Wade ignores him and the team jumps from the plane. It seems to be going fine until the wind causes every member of the team except Wade and Domino to die in a horrific way. Zeitgeist meets his end by landing in a wood chipper. When Peter attempts to rescue him, Zeitgeist unintentionally vomits on him, killing him as well.

Zeitgeist is very enthusiastic about his job as he’s seen cheering on the plane as they approach the convoy. He seems quite chilled and relaxed in the other scenes, despite the crazy vibe about him. 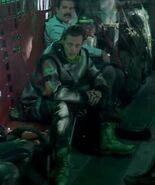