NOTE: This article is about the incarnation of Zelda from the non-canonical The Legend of Zelda games released for the Philips CD-i. The mainstream version can be found here: Princess Zelda.

Having Feasts with her Father

Zelda is the titular protagonist of the Zelda CD-i series. She was featured in three games made by a third party for the Phillips CD-i system. In Link: The Faces of Evil, she was kidnapped by Ganon and had to be freed. In Zelda: The Wand of Gamelon and Zelda's Adventure, Princess Zelda was the main protagonist, as the plot in both games involves Link's kidnapping.

In Zelda: The Wand of Gamelon, The King tells what happened to Link. To save Link and her father, Zelda tells Impa to save them. And then Link laughed at the end. In the YouTube Poops, Zelda goes on many misadventures with Link and her father, the King. She is constantly targeted by Ganon as bait to lure Link into a trap, but fails every time. She is usually annoyed by Link's attempts to make her kiss him. 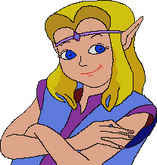 Zelda with Link in Link: Faces of Evil.