Doing anything that is fun.
Ruling over the multiverse.
Watching mortals fight.

Keep the population of the Universes down (ruse).

Test the virtue of mortals in the Tournament of Power (succeeded).

On & Off
Supreme Being
Antagonist

The Omni-King is a very small humanoid figure. He has a rather blank expression on his face and has purple and blue stripes on his face as well. He also has no nose present. He wears a pink vest on his body and on the front has two "omni" kanjis (全) present. His head has a rather lemon like shape, with his two ears being pointed and grey.

Omni-King watches the Universe 6 and Universe 7 tournament from a distance away of the Nameless Planet. After the tournament concludes, Champa is angry that his team lost and prepares to destroy them. However, the Omni-King and his attendants arrive on the Nameless Planet in the ring, which prevents him from doing so, as he along with Beerus are completely mortified and shocked by the Omni-King's presence. He states that his reason for visiting was because he believed Beerus and Champa were shrinking from their duties as Gods of Destruction. He asked how Beerus and Champa were doing in their jobs, and Whis tells him that Beerus focuses more on sleeping and consuming food more than doing his job, and Vados notes that Champa completely obsesses over food and all of the sweets that result in him being fat, and whatever food Vados serves Champa, he says it is awful.

The Omni-King, without a doubt is considered to be the most powerful being in the entire Dragon Ball franchise, exceeding even all the Gods of Destruction. While his true capabilities are not known and does not fight, the Omni-King possess immeasurable power. According to Beerus, the Omni-King is capable of effortlessly wiping out all 12 universes in an instant. This was proven when Whis stated that there used to be 18 universes and the Omni-King wiped out only six universes, when the latter was in a bad mood. Whis further states that there is no being greater than the Omni-King as he can wipe out anything from individuals to entire universes. The fact that Beerus and his brother, Champa who were considered to be Gods of Destruction were terrified of his presence is a testament of the enormous power the Omni-King wields, and it is because of this power why the Omni-King is feared and respected. Finally, The Omni-King being the supreme ruler of the Multiverse is the single most important being in existence and has absolute authority over the entire Multiverse. 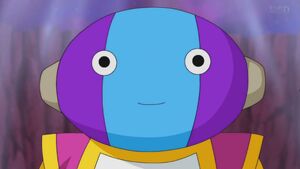 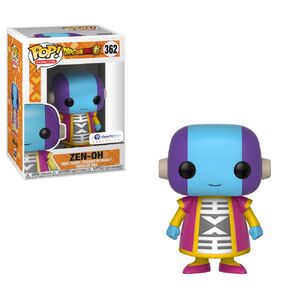 Zen-Oh's Funko Pop
Add a photo to this gallery

Retrieved from "https://hero.fandom.com/wiki/Zen-Oh?oldid=1756630"
Community content is available under CC-BY-SA unless otherwise noted.