Hanging out with Euden

Alternate Reality Sibling
Zena is a supporting character from a Dragalia Lost and the twin sister of Euden and the Zethia from the future where she no longer possessd by Morsayati who later took control of Euden in her timeline.

She is voiced by Ai Kayano in the Japanese version, and by Shannon Chan-Kent in the English version.

Like Zethia, she is blonde haired and blue eyed. She wears the same outfit as the time when she was Empress Zethia but instead of having blue ribbons, she has white ribbons instead. The stars on her scarf are white instead of blue.

Her mask appears to be black and purple with red eye slits.

Her Gala variant wears a shorter black dress with white frills and detached sleeveless. Under her horn shaped hair decorations is white feathers. Her scarf is white instead of black and her left leg has a gold bracelet and her feet now has white sandals with ribbons.

Zena has a similar personality to Zethia. Like Zethia, she cares for Euden and Notte. When Morsayati possessed her, Morsayati made her commit atrocities and after she was no longer possessed, she shows remorse for own sins and wears the outfit she wore when she possessed to remind her of her of the atrocities she had when possessed. She is willing to change a future into a brighter future.

A version of Zethia battling to save her world from the Other by using the power of the Dawnshard to visit alternate dimensions. After joining the prince's party in their fight, she asked them to call her "Zena".

Another Zethia from another world, who is working with the prince and his allies to save it. She is confused as to her place in this world and her relations with her new comrades, and wonders what it is she can really do.

Her weapon of choice is a wand and makes use of dark magic. Celestial Prayer deal damage to foes and makes her force strike to regenerate all allies hp and Twilight Crown makes stars surround her enemies that tries to come close to her will take damage. Her Gala is a light attuned staff unit and a attacker type adventurer. Her passive skill is Hallowed Auspex which grants her a special ability to use a powerful force strike when the gauge full by using one of her two skills. Her first skill is Glorious Sanctuary, a skill which heals all allies, create a circle spot that an adventurer can step on to heal allies, and fill her mana gauge. Her second skill Holy Crown summons stars to deal damage to all surrounding foes and fill her mana gauge similar to Glorious Sanctuary. 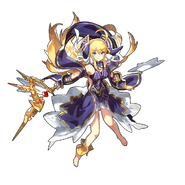