Defeating Evil Mechtogans and other bad clones of Mechtogan. Protecting Dan and Drago.

Protect the Earth and New Vestroia from evil threats (succeeded via Dan Kuso and the Battle Brawlers).

His appearence is an giant robotic dragon who was the same powers as Zenthon before him, he is an gigantic monster who takes down bad Mechtogans who threaten Drago, Zenthon and Dan.

Zenthon Titan makes his first appearence in Triple Threat when he was summoned by Zenthon, Dan and Drago with the Gate and Key they receive from Wavern, he manages to eradicate all bad Mechtogans who tried to assault Zenthon for no reason. Like Zenthon, he can take down Chaos Bakugans and hostile Mechtogans who threaten the Earth, New Vestroia and Bakugan Interspace that could be really happened. He is also an good friend of Silent Strike and his Titan counterpart Faser Titan.

In episode 26 in The Final Takedown, he was killed by Dreadeon and Razen Titan and was absorbed by Razenoid who grows into an giant monster, but his death is avenged when Drago evolves into Fusion Dragonoid after taking his Gate and Key back from Razenoid and Mag Mel. 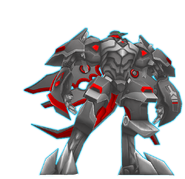