The Angel of Death

Atone for his past, Defeat Rowen and Sullivan (succeeded), Escape the Bezel (succeeded)

Zephyr is the deuteragonist and male lead of the video game Resonance of Fate. A PMF Hunter and Vashryon's longtime partner, he gives his all when on a job and isn't afraid to get his hands dirty. He also tends to spit out one-liners at enemies during a fight, though he still feels guilty about his past sins.

He is voiced by Hiro Shimono in the Japanese version and Scott Menville in the English version.

He is usually seen in cutscenes wielding the SG-B226 handgun, although he starts with the SMG-05 submachine gun. Later in the game, as with the other playable characters, Zephyr can equip different clothes and weapons to alter his appearance. His Type A set of clothes consists of different coloured jackets, shirts, pants and boots that are mainly colour variations on his default outfit. His Type B outfits consist of a shirt that zips up diagonally, as well as slightly different pants and boots. Funny or humorous clothing are in the Type C outfits. Note that specific outfits can activate different poses and actions after defeating enemies

Zephyr has several facets that he displays throughout the game. Sometimes he shows a jocular side that is similar to Vashyron. During various cutscenes he makes jokes at Leanne's expense, usually causing her to get angry at him. He also spouts several one-liners during combat, poking fun at the situations and enemies around the party. Zephyr also has a cold side to him, wanting to be left alone. Leanne constantly tries to cheer him up, only to be met by his rejects, and she is pushed away. However, he cares deeply about Leanne and the two seem to share romantic feelings for each other, but don't act on them.

Zephyr still feels guilty inside for the destruction of the Crank Seminary. In addition, Zephyr displays a rather vengeful side towards the people involved with the experiment that led to that tragic event.

Although violent and borderline sociopathic, Zephyr also has a sweet side, not only did he save Leanne, he tries to cheer her up..In his own way he tries to make the time better (sometimes) and gives it his all when it comes to bounty hunting.

In the Tower of Basel, in a future where Earth is covered in a poisonous fog, Zephyr was involved in an experiment where he and several other children were given traits of a girl called Rebecca who lived outside Basel to see if they could survive. He was the only success in the experiment, but there was a huge drawback: he became mentally unstable and goes into a killing frenzy, murdering every person involved in the experiment. Despite having been shot in the head twice, he still lived due to his newly-imbued immortality.

After that, he worked with Vashyron as a PMF Hunter. A year later, he sees Leanne jumping off a bridge and catches her in midair and saved her life. Since then, they have become friends and partners.

Some time later, Cardinal Lagerfeld, who was in charge of Crank Seminary during the time Zephyr went berserk, challenged him to a duel to avenge those who died during his rampage. Although he was defeated, he reveals to Zephyr that he had a sister among those who died and unknowingly killed her. As grief overtook Zephyr, he was knocked to the ground and about to be stabbed until Leanne saved him with a single shot. Depite knowing his past, Leanne consoles him and tells him to continue living for her sake.

Sullivan says that he now held Leanne's Quartz, and if he dies, she dies as well. Cardinal Rowen overhears this and immediately guns him down. Zephyr flies into a rage, swearing vengeance against Rowen.

Rowen gathers his forces at the Basilica and awaits the heroes for their arrival. Eventually they fought their way to him, and after a long hard bullet ballet, the finale ends with Zephyr putting a bullet through Rowen's heart. They leave at Vashyron's request and they find that the miasma had subsided.

Note: In the bonus dungeon Neverland, an abandoned amusement park, the heroes encounter Sullivan and Rebecca as Secret Bosses. Even if defeated, Sullivan claims to be immortal, and all "theories" are see-through to him. Zephyr vows to keep killing him until he dies permanently with Sullivan looking forward to it.

Zephyr makes an appearance in Project X Zone. He is a playable character who is partnered up with Leanne.

A member of a squad of Hunters, people that will complete any job for money. With no blood relatives, he was raised in a Seminary, but he caused a terrible accident there due to his rejection of its oppressive regime. Dragging his sins behind, he fell into a self-destructive lifestyle, but after saving Leanne's life and then seeing her own brave struggle against her cruel fate, he decided to keep on living in order to support her, and together they attempted to solve the mysteries of the layered tower-city of Basel. Can be blunt and indifferent, and has a bit of a foul mouth. However, he is pure at heart, and his sense of teamwork is also very strong. 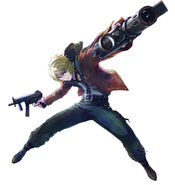