The Nightmare Before Christmas

Zero is tritagonist of the 1993 horror-animated film The Nightmare Before Christmas. he is Jack Skellington's pet ghost dog and best friend. He is a mixture of Rudolph the Red-Nosed Reindeer, Max, and Casper the Friendly Ghost.

Zero has a glowing pumpkin nose, an obvious Halloween pun of Rudolph the Red-Nosed Reindeer. Zero helps guide his master Jack Skellington through the fog on Christmas Eve. Zero has a doghouse gravestone seen before Jack enters the Hinterlands.

Zero first appeared in the movie. In the movie, Jack finds the door to Christmas Town while he is taking Zero for a walk. Later, when Jack wants to take off to deliver presents, Zero has to light the way because of the thick fog, similar to Santa and Rudolph. At the end of the movie, Jack and Sally kiss each other as Zero looks at them and flies into the air, transforming into a star.

Zero appears in multiple places during the Nightmare Before Christmas overlay of the Haunted Mansion. Firstly, he is seen floating in the Endless Hallway, with a bone at the front reading, "To Zero" and other bones decorating the doorway. He later appears in the ballroom scene, flying around above the Christmas tree. Sometimes, he floats around the gingerbread house on the dining room table. In the graveyard, he appears next to Jack dressed as Sandy Claws to welcome guests to the ride's finale. This is a tribute to the original ride, which has a petrified caretaker and his dog, cowering at his feet. Lastly, Zero leads Jack's sleigh as their shadow crosses over the moon in the Exit Crypt.

Just before the Halloween Screams Fireworks at Disneyland, Anaheim, California, Zero flies around the top turrets of Sleeping Beauty Castle and accompanies his master's appearances. 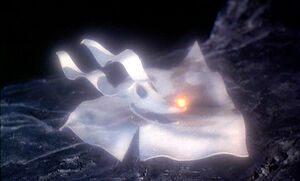 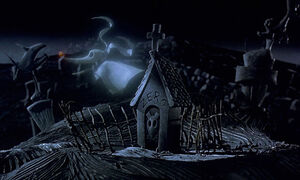 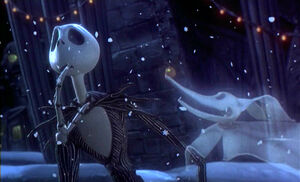 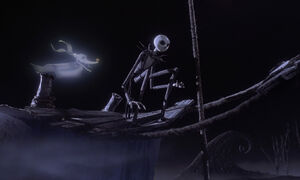 Retrieved from "https://hero.fandom.com/wiki/Zero_(The_Nightmare_Before_Christmas)?oldid=1956007"
Community content is available under CC-BY-SA unless otherwise noted.