Darling in the Franxx

-Hiro (Love interest)
All the other member of plantation 13

Main Anti-heroine, Good Clone
Zero Two (ゼロツー, Zero Tsū) is one of the main characters in DARLING in the FRANXX series. She is an elite FRANXX pilot who is a member of a race of humans with klaxosaur blood. She is the pistil of the Franxx, Strelizia.

She is voiced in Japanese by Haruka Tomatsu (who also voices Asuna in the Sword Art Online series) and in English by Tia Ballard (who also voices Happy in Fairy Tail, Xiao-Mei in Fullmetal Alchemist: Brotherhood and Garm in Garo: The Animation).

Zero Two has long pastel pink hair with a fringe and a pair of red horns on her head. Her eyes are cyan with pinkish-red eyeliner. Her eyes turn red without her headband. She has a slender and athletic figure; she is the tallest girl among the squad and about the same height as Hiro.

Zero Two's full ensemble is composed of a white military cap with a matching overcoat and boots. She is at often seen wearing her signature red uniform, black tights, and white boots. She also wear a limiter headband on her horns.

Zero Two's original pilot uniform was a tight, dark red bodysuit with a cap of the same color. After she became an official Plantation 13 Parasite, she, like the other Squad 13 Pistils, started wearing a white uniform, with red accents to represent the FRANXX she pilots.

As side effects of aggressively riding Strelizia, Zero Two fangs and horns grow at an alarming rate and her eyes shine red when angered, even when she wears her limiter headband.

Zero Two's personality is dangerous and alluring. She's an elite pilot with the pseudonym "Partner Killer" (パートナー殺し, Pātonā-Goroshi), given the mysterious happenings of her co-pilots dying after a short number of FRANXX outings. She appears to be playful towards Hiro and sometimes shows some sense of humor; even so, she follows her duties. It is implied in Episode 7 that she knows more about the outside world than the other members of Squad 13. Zero Two is very independent, no-nonsense, cold and apathetic. She also very honest, by believing everyone especially the "weaklings" will die in next day at their duty to kill klaxosaurs. At some point, she can be childish and a trickster, especially at Episdoe 8, where she trick the other Stamen to bath at girls bathroom, and stole their clothes. Also she have weird habits to pour all her food with a honey and lick a people to feel their "taste". However at story progressed, She slowly suffer a depression which causing she become more wild, aloof, extremelly difficult to be controled. She begin hated her own appearance and vowing she wanted to kill Klaxosaurs, so she can become a human. After Hiro regain his memory about her when she almost killing him, Zero Two regret for her action and try to speak with him. However, due she was in very bad mood, she mistake all her squad 13 fellow especially Ichigo are try to separated her from Hiro due she being a monster. After forced to picked up by APE, Zero Two become more animalistic and uncontrollable. Also overwhelm by her saddness due she already make her fellow squad 13 and Hiro after see her "true" nature. After reconcile with Hiro and squad 13, Zero Two become more rational, opened, cheerful and shown her compansion to the others and no longer holds her enviouness toward Ichigo.

After Dr.Werner Frank encounter the leader of Klaxosaurs, 001, he decide to create a clone of her which he take her DNA sample from her hair. Most of the subject are failed but only one who survive, which he given the codename as 002. He also create the other clones from 002 DNA, but they didn't inherited her Klaxosaurs DNA, which are known as "the 9's".

As Child, 002 spend her time alone at her room, being feed well by her caretaker. One day, a caretaker bring her a storybook.The book is about the story of "The Beast and the prince".She shown her many each pages on the book, and allow 002 to keep it. The next day, 002 force to brought to "Garden", where Dr.Franxx and the other adults begin their awful experiment toward her. At her first time arrival at "Garden", a boy named Hiro with codename 016 fascinated to see her and begin curious about her. However, after he see the truth that many adult do a horrible things to her which causing she in great pain, Hiro decide to free her and determined to runaway from adults.

After Hiro suceed to freed her, 002 carry him due lost his consciousness after fell from tree after freeing her. 002 feel weird with the enviroment at outside. When Hiro regain his consciousness, he surprise to see 002 swallow a mouse and begin to bite him when Hiro try to convince her release the mouse from her mouth. But she quickly regret for her action, and Hiro realized she probably understand him. Hiro initially named her as "Oni" based on her codename, but he feel "Zero Two" was a perfect name for her. When she with Hiro, he teach her everything about the outsides, and introduce her about sweets. In turn, Zero Two wants Hiro to read her the story of "The Beast and the prince", and try very hard to avoid their sigh from the adults. After he finish tell the story, Zero Two fascinated with the story. However, when they about to continue their runaway, her feet start bleeding and Hiro lick her blood to heal it. With him kneeling before her, she confuses his pose with the prince proposing. He asks if it's marriage. Smiling, he says that they will once they escape. He tells her he wants to be with her forever too and become her darling. She begins crying and blushing and hugs him close. They look up and notice that they are under mistletoe. They are suddenly interrupted by a group of adults. Though Hiro tries to protect her, he is hit with the butt of a gun and falls to the ground bleeding.

The Adults decide to erase both their memories, but noticed that there are some small trace that can be difficult to erased it from Zero Two. After their separated, Hiro bring back to Garden without any memory of her and Zero Two determined to reunited with her "darling" by vowing to kill many klaxosaurs, so she can become a fully a human. Zero Two become the special pistil and biggest assets of APE, and wanted to her to be the ultimate weapon to defeat klaxosaurs. Aside this, she always change her partner due most of Stamen who being partnered with her will die after third time to rides with her.

Two years ago before the series, Zero Two recklessly and brutally kill 090 partner at their first time encounter. Due her action and her lack of emphatiness toward him and his partner, 090 holds his grudes and hatred to her. 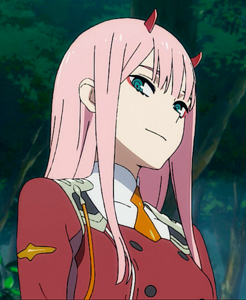 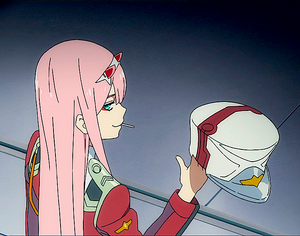 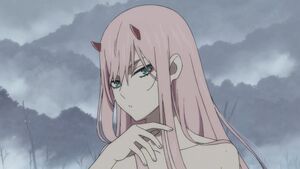 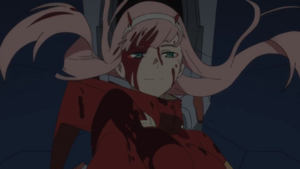 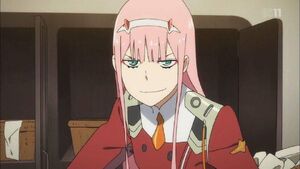 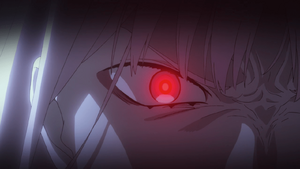 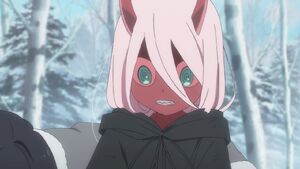 A child Zero Two in the flashback 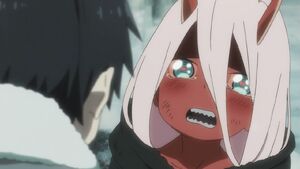 Zero Two crying after Hiro promised her to be her "Darling" 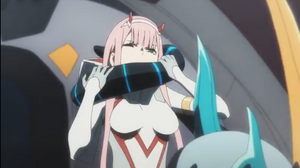 Being held and later thrown away by 001 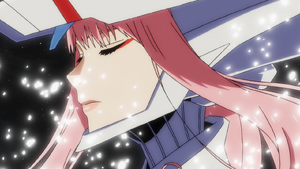 Become one with Strelitzia Apus 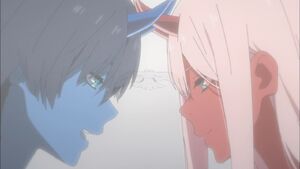 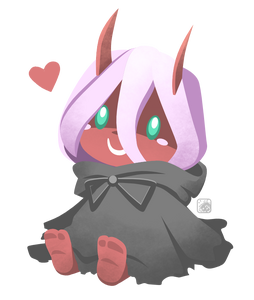 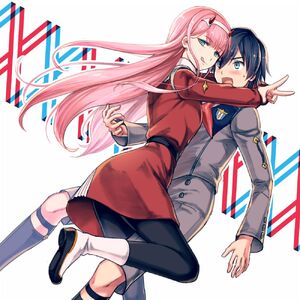 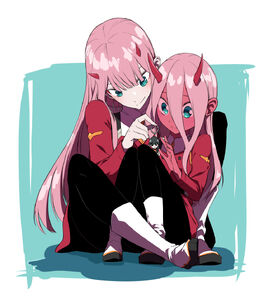 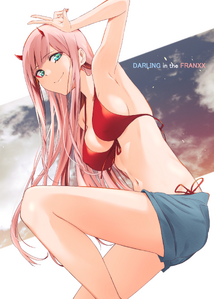 Retrieved from "https://hero.fandom.com/wiki/Zero_Two?oldid=1753229"
Community content is available under CC-BY-SA unless otherwise noted.