One of the Big Three
King of Mount Olympus
God of the Sky, Lightning, Weather, Honor and Justice

Ruling the Olympians.
Arguing with Poseidon.

Defeat and overthrow the Titans (succeeded).
Maintain his rule on Mount Olympus.
Have his bolt returned to him.
Defeat the Gigantes in the First and Second Giant War (both succeeded).

The Titans
The Gigantes
Kampê
Luke Castellan
The Olympians (sometimes)

Zeus is a major character in Rick Riordan's Percy Jackson and the Olympians series, and is the king of Olympus, and the Greek God of lightning, honor, justice, and the sky. He's the son of Kronos and Rhea, and the brother of Hades, Poseidon, Chiron, Hera, Demeter and Hestia. He is also the father of the Greek Gods Ares, Athena, Apollo, Artemis, Hephaestus, Hermes and Persephone, and Demigods Jason and Thalia Grace.

In the first film adaption, he is portrayed by Sean Bean, who also portrayed Boromir in The Lord of the Rings: The Fellowship of the Ring, and Eddard "Ned" Stark in HBO's Game of Thrones.

Zeus is the youngest son of the titans King Kronos and Rhea, and is the youngest sibling to Hades, Poseidon, Hera, Hestia, Demeter, and Chiron. His siblings were devoured by Kronos, who was scared that they would overthrow him as predicted by Ouranos years prior. Rhea, distraught that she couldn't plead with Kronos so spare their children, and gave Zeus to Gaea and the nine nymphs who advised her to bring the child to the island of Crete. Rhea gave Kronos a smooth boulder to deceive Kronos, as he had though he had eaten his final child.

Zeus was raised by Rhea, the nymphs, the loud Kouretes, and the goat Amaltheia through his youth. Rhea would tell Zeus about his brothers and sisters, whom he was destined to save from their father's stomach. As an adult, Zeus successfully transformed into a titanic version of himself and infiltrated Mount Othrys with the help of his mother. He was able to convince Kronos to hire him as a cup bearer, and succeeded in entertaining the titans with his singing and dancing skills.

Zeus then encouraged all the male Titans to participate in a drinking contest, and later prepared a special drink mixed with nectar and a sleeping potion to knock out the titans. For Kronos, Zeus prepared him a powerful emetic mixed with nectar and mustard, which would make him vomit everything he had eaten before. Kronos participated in another drinking contest, and vomited all of the contents in his stomach, but it was in reverse order: the boulder, Poseidon, Hades, Hera, Demeter, and Hestia. Despite being swallowed whole, they had grown inside Kronos' stomach, being immortal Gods, and the other Titans were unable to retaliate due to drinking the sleeping potion.

Zeus introduced himself to his siblings, and they all escaped Mount Othrys before the titans could come back into their senses. At the base of Mount Ida, they reunited with Rhea, and decided to let Zeus be their leader to fight against the Titans. However, since the Titans were well armed, Zeus decided to release the Elder Cyclops and Hekatonkheire from Tartarus to craft them weapons.

Zeus and his siblings declared war on Kronos and the Titans, which resulted in eleven years of fighting, with the Gods eventually becoming experienced warriors and mastered their weaponry. Preparing for the final battle of the war, Zeus and his siblings ascended to Mount Olympus, and the former used his Master Bolt to destroy Mount Othrys, hurling Kronos from his throne. The Gods invaded what was left of Mount Orthys, and defeated the titans Atlas, Hyperion, Iapetus, Krios, and Koios.

The Titans were chained, and Zeus sliced Kronos into a thousand pieces with his scythe, and casted him into Tartarus alongside his followers (except for Atlas, who was forced to hold the sky for eternity). Zeus then offered the Hekatonkheires to become the jailer of the Titans in Tartarus, which they agreed to.

In the aftermath of the battle, the Elder Cyclopes chained up all of the defeated Titans, while the Hekatonkheires forced them to kneel before Zeus, Poseidon and Hades. Zeus took his father's scythe and sliced Kronos into a thousand pieces, before casting him into Tartarus, along with the rest of his followers (except for Atlas, who was forced to hold the sky). Afterwards, Zeus offered the Hekatonkheires to return to Tartarus, this time as the jailers of the Titans, to which they readily agreed.

The Gods chose Mount Olympus as their residence, and started to call themselves Olympians as the cyclops' built palaces for them there. Zeus had a private meeting with Poseidon and Hades, and the three agreed to divide the world between themselves. Despite being the eldest son by birthright, Hade was given the Underworld, as Poseidon claimed the seas with acceptance from Ouranos, and Zeus claimed the heavens as his domain. After the division, Zeus, Poseidon, and Hades became known as "The Big Three", but Zeus' authority was recognized as superior due to him saving his siblings.

Zeus married his childhood sweetheart, Metis after the war, and served him as his adviser and mentor for his life. Upon Metis' pregnancy, Zeus learned from her that she would give birth to a daughter, and then a son that would overthrow him. Zeus tried to stop this fate like his father before him, and swallowed Metis whole, but she still gave birth to their daughter, Athena, who came from Zeus' body when Hephaestus split Zeus' head open when he had an unbearable headache.

Zeus later married the Titaness Themis after swallowing Metis, and she gave birth two pairs of triplets: the Horae and the Fates, but the latter were born as old women. After becoming the father of the fates, Zeus feared the prospect of having even more intimidating children, and the Olympian and Titaness agreed to end their marriage peacefully.

Hestia decided to never marry due to numerous reasons, the first being that she could remember being swallowed by her father, seeing her mother suffer from Kronos, Zeus doing the same to Metis, and didn't want disabled, different, or strange children like his with Themis. Zeus decided not to, after hearing Hestia state that she wished to never marry and be a virgin goddess, and offered to take care for the hearth of all time. Zeus then decided to court his sister Demeter, and transformed into a serpent, and successfully seduced her, resulting in the birth of Persephone.

Zeus then became attracted to his sister Hera, who refused to marry him until they made a bet where if she confessed her love for him, they would marry. Zeus succeeded in tricking Hera by causing a thunderstorm, and transformed himself into a injured cuckoo, which Hera took care of and became fond of. Despite being outraged upon Zeus winning the bet, Hera was impressed by Zeus' intellect and resourcefulness, and agreed to marry him if he remained loyal to her, an oath he broke many times over.

In the book Zeus thinks Percy Jackson stole his ultimate weapon, the master bolt. He gives Percy a deadline to get the bolt, otherwise the battle of the big three will take place. By the end of the book, Percy gives Zeus the lightning bolt after battling Ares, leaving his throne.

Zeus led the war on Typhon, meanwhile the demigods fought Kronos who was controlled by Luke Castellan. Even after using the master bolt on him, Typhon kept fighting, but luckily after help from his brother who abandoned his own home, they defeated Typhon. Kronos was defeated by Luke, who managed to resist him and stabbed himself to defeat the titan.

Zeus has shown himself to be complex character, who often has shown multiple sides to his personality and traits. He is proud and commanding, but has a high amount of self-resect, to the point of being a narcissist. He demands respect from anyone he meets, showing this when Percy acknowledged Poseidon before him in The Lightning Thief. Poseidon even references this to his son Percy, telling him that Zeus would have done well as the Greek God of theater, due to his dramatic exists and showing off.

In addition, he is deeply hypocritical, as despite being the god of honor and justice, he doesn't always provide the best example of it, even when he demands high standards from others. Though he made the pact that the Big Three wouldn't have children during World War II, he had two demigod children from affairs. He also attempted to kill Hades' children, Bianca and Nico, despite them being born before the oath was made. This caused Hades to get revenge on Zeus, due to Bianca and Nico's mother, Maria, being killed. Another example is telling Percy that his birth is a crime, despite having two children from mortal women.

Zeus also has the tendency to hold grudges, being paranoid, obsessed, vengeful and wrathful to anyone who he thinks is plotting against him, insulted him, or when he doesn't get what he wants. This is what makes him somewhat similar to his father, as both were deeply obsessed with prophecies, and feared being overthrown. With those traits and being unforgiving, often clouds his better judgment, and make selfish decisions rather than base them on justice. He has a strong dislike for his brother Poseidon, believing that he tried to overthrow him, and instantly blames him for anything. An example is Zeus blaming Poseidon for stealing his master bolt, or when he blamed Apollo for hastening the second giant war.

Despite his flaws, Zeus has shown himself to be respectable, compassionate, sympathetic, and honorable side at times. He deeply loves his children, but cannot show as much love as the other gods doe, as he is the leader and must set an example. He has shown mercy upon his children at times, feeling great pity when seeing Thalia was on the brink of death due to Hades' monsters, and turned her into a pine tree. Later on, he voted to spare Thalia, and open said she had done well. Despite his love for all of his children, he has shown to pick and play favorites, notably his daughters Athena and Artemis. He also has turn on his children if he feels insulted or challenged, as he has threatened his children with lightning bolts.

He has shown sympathy to those who had suffered the same injustice that he and other gods have suffered, and was the first acknowledge Percy's statement about killing Ophiotarus, stating that Kronos had tried to do the same with him and his siblings. Realizing that he and the other gods were willing kill Ophiotarus due to fear of it posing the gods, he reconsidered his decision. In addition, Zeus has shown mercy to others, notably saving Thalia from death, and later voting to spare her. Zeus also has shown himself to be witty and charming, this is possibly due to him learning how to make jokes and entertain, but he rarely shows this. 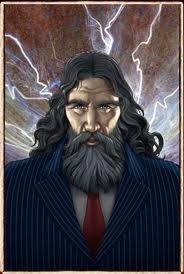 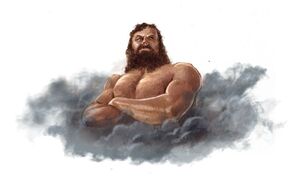 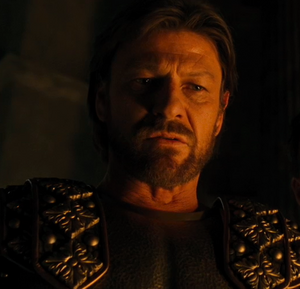 Sean Bean as Zeus in The Lighting Thief film.