To maintain the order of reality.

To protect Olympus.
To reunite with his lost son (succeeded).

Pain and Panic
The Titans

Zeus is a supporting character in Disney's Hercules and is the benevolent and all-powerful chief Olympian god (in stark contrast to the more chaotic Zeus of myth) - he fights against the evil Titans and his brother Hades while also continuing to try and care for Hercules despite him being unintentionally banished from Olympus due to an evil curse that drained him of most of his divine powers, save for his strength.

Like his mythological counterpart, Zeus is the powerful ruler of Olympus, however he is notably more benevolent, jovial, and easy-going.  At times, he tends to come out as being somewhat childish and stubborn much to his wife Hera's concern.

Zeus has a tendency to belittle and joke with his brother Hades, which has more-or-less led to the latter's animosity with the former, and Hades's plotting to overthrow Zeus and take over Olympus.  He can however, get angry with his brother, Hades because of how evil he is.

Despite this, the other Olympian Gods love and respect Zeus due to his fun-loving persona.  In addition, he is also shown to be a caring father to his son Hercules, often fascinated in his adventures as a teenager and young adult, and a reliable voice of reason.

Prior to the beginning of the film, the Muses reveal that Zeus is most famous for his defeat of the Titans in centuries past, which saved the world from the beasts' terrible rampages and also granted him his status as "king" of the gods.

Zeus first appears at the beginning of film as the host for a party cerebrating the recent birth of his new son Hercules.  Virtually every god attends the celebration save for one notable exception:  his younger brother Hades, who ends up arriving late.  While the other gods display anger and distrust towards the god of the underworld, Zeus is much more welcoming and even jokes about him (much to Hade's annoyance).

Hades leaves the party early, and begins a plot to overthrow his brother by first kidnapping his son and turning him mortal, in attempt to make sure Hercules doesn't interfere with his plot in the future (as the Fates note, should he participate, Hades will immediately fail).  He sends Pain and Panic to kidnap Hercules whilest Zeus and Hera are asleep.  They barely suceed, but in the process wake up Zeus and Hera, who send out evry god search for their missing son, but turn up unsuccessful.

Many years later, a now teenaged Hercules visits the temple of Zeus outside his hometown after being casted out.  There, Zeus arises in the form of the statue at the temple and reveals Hercules' true identity, reunites him with Pegasus, and tells him to search for the satyr Philoctetes.

Initailly, Phil refuses to train Hercules, but in doing so, angers Zeus, who strikes down on Phil with one of his lightning bolts, causing him to (reluctantly) change his mind.

After Phil's training plays, off and Hercules defeats many of Hades' minions, he travels back to the temple and tells Zeus about his incredible battles, but when he asks if he can return to Olympus, Zeus readily reveals that he cannot just yet, noting that being famous doesn't make him a hero, and that in order to ascend, he must "look inside his heart".

Later on after Hercules gives up his powers to free Megara, Hades unleashes the Titans and begins his plot to take over Olympus.  Zeus, alongside the other gods fight off the Titans, but they are soon overpowered and captured, with Zeus being imprisoned inside hardened rock.  Soon afterwards, Hercules arrives after regaining his powers, freeing Zeus and the other gods and destroying the Titans.

After Hercules rescues Megara's soul from the River Styx, he ascends to the gates of Olympus where he is proudly greeted by his father, having finally being reunited with his birth parents after eighteen years.  Zeus tells that by sacreficing himself to save Meg's soul (and succeeding), he proved that a hero like himself is not measured by his power or strength, but by the strength of his own heart.

Hercules, who is elated with the honor of returning to Olympus, but chooses to turn it down to spend the rest of his life with Meg, which both Zeus and his wife Hera respect.  When Hercules returns to Thebes, Zeus paints a constellation of Hercules in the night sky, not only to honor his son, but also to furfill Phil's lifelong dream of his much needed recognization.

Role in the Animated Series

Zeus would play a recurring role in the animated series that followed and sometimes came to Hercules' aid, such as when he struck Ares with a lightning bolt after learning the haughty god of war, unaware of his true identity, had planned on executing Hercules. 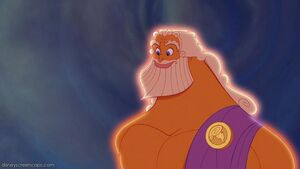 Zeus screaming "NNNNNOOOOOOOOO!!!!!!!" after his son Hercules is been kidnapped by Pain and Panic. 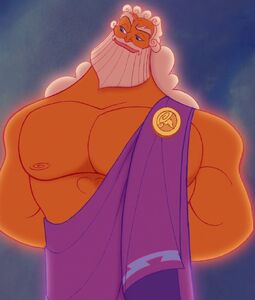