Throwing lightning bolts from the sky.

Increasing Greece's population.
Punishing, torturing, or killing those who he believes betrayed him.
Having affairs with mortals.

Forever punish the Titans.
Kill the remaining Titans.
Prevent the Oracle's prediction from coming true.
Prevent the fall of Mount Olympus (all failed).

He is the Greek god of the sky, lightning and the heavens, who became the king of Mount Olympus after defeating his father during the Great War. He would father countless children, the most notable being Kratos from the mortal woman Castillo, whom would become the dread Ghost of Sparta. Though Zeus initially supported Kratos in stopping Ares, the Olympian would be infected with the evil from Pandora's box and developed fear of his son. He would try to kill Kratos to prevent the end of the Greek pantheon, but failed alongside the others, ending the era of the Greek Gods.

Paul Eiding (who also voiced Max Tennyson in Ben 10 and Roy Campbell in the Metal Gear Solid series) voiced the character as Zeus and The Grave Digger in 2005's God of War, and voiced The Grave Digger again in Ghost of Sparta. Corey Burton (who also voiced Ludwig Von Drake in Disney's Mickey Mouse franchise and Zeus in Disney's Hercules series) voiced the character as Zeus in God of War II, God of War III and 2018's God of War, and also reprised his voice for PlayStation All-Star's Battle Royale. Fred Tatasciore (who also voiced Poseidon in 2005's God of War, Damon Baird and Tai Kaliso in the Gears of War series, Qui-Gon Jinn in Star Wars: Clone Wars, Nikolai Belinski in the Call of Duty zombie series, Mario Auditore in the Assassin's Creed series, Kevin Flynn in Tron: Evolution, Slam Bam, Zook, and Warnado in Skylanders) voiced the character as Zeus in Ghost of Sparta.

At some point, Zeus had an affair with Callisto. The circumstances are unknown, but the affair resulted in a young child named Kratos. Kratos was a strong boy and a mighty warrior with unstoppable rage and ambition. Hera, displeased at Zeus for fathering yet another bastard, demanded he kill the boy, fearing only destruction will come from his existence. Zeus, taking pity on the child, refused. Sometime later, Zeus conceived another son with Callisto, named Deimos.

Having brutally slain his own wife and child in blind anger, infused by the God of War, Kratos sought to rid himself of the nightmares by devoting his services to the gods of Olympus.

Around halfway through Kratos' penance, Zeus was one of the many gods that fell victim to an enchanted slumber, orchestrated by Morpheus when the sun god, Helios, was knocked from the sky. Kratos eventually discovered that this was the work of Persephone, who intended to use him to empower the Titan, Atlas, in order to destroy the Pillar of the World and bring an end to all life, as well as her own suffering.

Fortunately for Zeus and the other gods, Kratos was able to defeat the Queen of the Underworld and save Helios, forcing Morpheus to retreat. What they did not know was that Kratos had been forced to relinquish any hopes of reuniting with his beloved daughter in the process of saving the world, pushing his disillusionment with the gods ever closer to open hatred and rebellion.

Near the end of Kratos' service to the gods, Ares besieged the city of Athens to gain favor from Zeus over his half-sister, Athena. Zeus had forbidden the gods from waging war on each other, so he allowed Athena to receive help from Kratos, who was told that defeating Ares would complete his penance. During his quest, Kratos met Zeus himself within the damaged city of Athens, where he was given Zeus' Fury, the ability to wield and throw powerful thunderbolts. In addition, Zeus, in the mortal guise of the Grave Digger, created a portal to the Underworld through a grave he claimed to be digging for Kratos, allowing the Spartan to escape the realm of the dead late in his adventure.

When Ares seemingly killed Kratos and took Pandora's Box for himself, he yelled to the skies, cursing his father for constantly favoring Athena and asking if Zeus could finally see what his son was capable of. He declared that he would not hesitate to use the box against Olympus itself, but then Kratos, having fought his way out of the Underworld, used a bolt of Zeus' Fury to reclaim it, at last opening the ancient artifact and harnessing its power to destroy his former master.

Zeus and the gods guided Kratos to defeat Ares, as he was the only real threat to Olympus. With Ares dead, the Olympians forgave Kratos for the crime of killing his own family (although, to Kratos' dismay, they were unable to remove the horrible memories from his mind), and made him the new God of War.

It is later revealed that Zeus and the other gods fell prey to the evils locked away in Pandora's Box after Kratos opened it to defeat Ares. Apparently, the King of the Gods didn't realize that if Kratos used the Box, the evils would be released. As a result, Zeus became slowly overwhelmed by his personal plague: fear that the cycle of son killing father would repeat itself. Just as Cronos killed Ouranus, and as Zeus himself defeated Cronos, the king of the gods expected that Kratos, infuriated by the revelation that not even the gods could end his nightmares, would be the son who would try to kill him and take the throne of Olympus for himself. 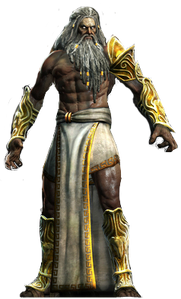 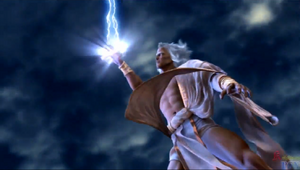 Young Zeus during the Great War. 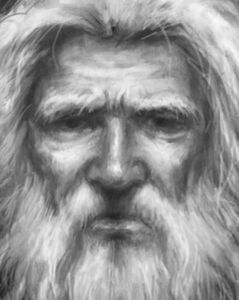 Zeus in God of War. 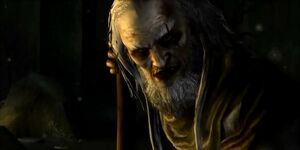 Zeus as the Grave Digger in Ghost of Sparta. 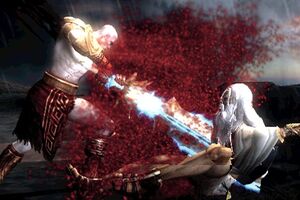 Zeus being stabbed by Kratos. 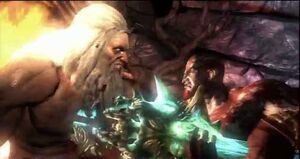 Zeus being stabbed once again by Kratos inside Gaia. 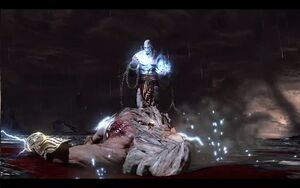 Zeus' corpse as Kratos succeeds in getting his revenge. 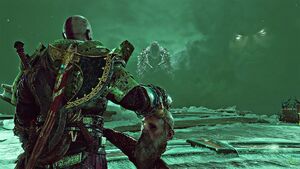 Zeus in Helheim, appearing to Kratos. 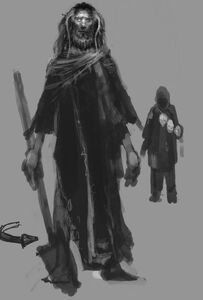 Concept art of Zeus as the Grave Digger. 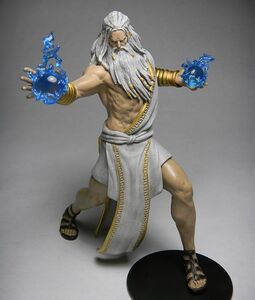 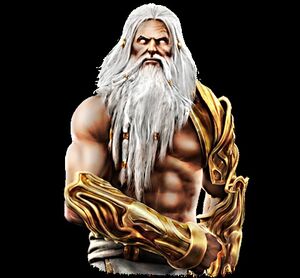