live a life with Dr. K (both succeeded).

Ziggy Grover is a protagonist and green ranger of Power Rangers RPM. He is the Ranger Operator Series Green. His operation number is four. He is the Boyfriend of Dr.K , and the best friend of teammate Dillon.

Milo Cawthorne plays the role of Ziggy in the series.

Before becoming a Ranger, he was an associate of Fresno Bob, the boss of the Scorpion Cartel, an infamous crime syndicate. Clumsy even back then, he would often fail the missions given to him, but continued to work for the Cartels to get money to help support an orphanage full of ill children that didn't have the resources to get proper treatment. Ziggy's last chance came went he was sent to get a truck and deliver it to the five main Cartels of Corinth. However Ziggy, along with the truck, disappeared from Corinth, making the criminals believe he'd cashed out the shipment for himself. In reality, Ziggy discovered the truck was full of $5 million worth of medical supplies that he could use to support the children in the orphanage. He never told anyone what happened out of fear the orphanage and its people would be targeted by the Cartels. He fled Corinth before henchmen from the Cartels could get a hold of him.

Heading back to Corinth

When Ziggy found Dillon wandering the wastelands searching for Corinth, he made a failed attempt to hijack the loner's car before deciding to escort him to the city.

Through Dillon's skills, the two were able to make it past the Venjix barricade and into Corinth, but when it was found that Dillon had internal Venjix hardware, they were both thrown into prison. After Dillon was confronted by Colonel Mason Truman, he agreed to become the Black Ranger on the condition that Ziggy would be freed from prison. Ziggy was thus set free alongside Dillon and joined the Rangers as an assistant.

Go for the Green

Ziggy later tried to help the Rangers out by scheduling auditions for the Ranger Series Green, which at the time lacked an operator. As Ziggy frantically tried to salvage the auditions after a rough start, he was confronted by Fresno Bob's men, to whom still believed Ziggy owed money. It was then that Tenaya 7 under the guise of a human, saved him. Ziggy, impressed with what she could do, instantly brought her to the auditions. When the Rangers agreed that Tenaya would be perfect to fill the role of Ranger Green, Ziggy was sent to get the Morpher and deliver it to their new recruit. When Ziggy returned, however, he discovered Tenaya was actually one of Venjix's latest soldiers under orders to obtain the morpher.

After a frenzied chase, Tenaya 7 eventually caught up with him. Struggling to keep the morpher away from her, in an act of desperation, Ziggy activated the morpher bonding sequence, and became Ranger Green himself. His unauthorized activation of the morpher initially caused blatant disapproval amongst Dr. K and the other Rangers, save for Dillon, due to his obvious lack of skill.

As Ranger Green, Ziggy still has a lot of learning to do. He still can't fully control his powers and his fighting style (or rather, lack thereof) leaves much to be desired, but what he lacks in skills, he more than makes up for in heart. When he first became a Ranger, he was reluctant, frequently hiding instead of fighting, and was, as expected, extremely incompetent at handling the Ranger tech, especially at controlling his new teleportation powers. Since then however, Ziggy has shown signs of improvement, able to hold his own against the Grinders despite his still apparent clumsiness, even proving to be fairly useful in combat. He also seems to be unsettled by the Ranger powers. For example, he questions ;why there is an explosion when he morphs, or why he must scream at the top of his lungs to activate Morphing sequence.

Ziggy and the Doctor

His less-than-outstanding relationship with Dr. K, she Dr. K initially found Ziggy to be quite annoying, and she was openly hostile to him. Even after she begins to open up upon Gem and Gemma's return, she remains frosty to him, often refusing to call him by name as she began to do with the other Rangers. Ziggy, however, seems attracted to Dr. K; in the episode "Dome Dolls", he admitted to her he had a dream where he was on a date with her.He has also expressed a mild attraction towards Tenaya 7, once stating, "When she's not pounding us into the pavement, she's kind of a hottie."Soon enough, it becomes obvious that Dr. K does actually think well of Ziggy; she accidentally once called him by his first name in front of Gemmaand even named her password after him, which Summer figured out (though she lied to the other Rangers about it to keep Dr. K's secret safe).

She finally begins to turn around when the both of them are accidentally trapped in a cave that had little air on Dr. K's birthday. Determined to prevent what could be their last moment's and Dr. K's last birthday from being completely miserable and regret filled, Ziggy puts on a shadow puppet show for her and to his joy and relief, is finally able to make her smile.

After the war, Ziggy and Dr. K announce they are opening a children's school, where Dr. K will teach biofield physics and Ziggy will teach shadow puppetry and cooking. She also finally refers to Ziggy by his first name, saying that since he is no longer a Ranger, she needs to call him something. She also seems to be able to finally admit to her feelings for him, or at least tolerate his feelings for her, allowing Ziggy to put his arm around her.

Ziggy is kind of an all talk guy, which tends to get him in trouble. He is often made out to be a clown and isn't easily taken seriously by others. He is generally clumsy, wacky, silly and a bit of a coward, but for what he lacks in skill and physical prowess, he makes up for with heart. He usually wants to stay out of trouble, but won't hesitate to help the other Rangers. He's simple-minded and somewhat stupidly optimistic, which often leaves him on the receiving end of Dr. K's blunt verbal insults. Dr. K's obvious lack of acknowledgment of him in comparison to how she treats the other Rangers tends to frustrate him, especially since he fervently expresses the desire to be her friend and almost compulsively tries to initiate a positive conversation between them.

Ziggy is not the strongest Ranger but he can take out his Nitro Blaster to shoot the Grinders. Turbo Axe is Ranger Operator Series Green's special weapon. He can slash the Grinders with his axe. It can combine with the Rocket Blaster to form the Turbo Plasma Launcher.

Ziggy's backstory is unique because he is one of the few rangers to be involved in a criminal enterprise before becoming a ranger. However, Dr. K manages to see Ziggy's good heart and saves him in his backstory episode Ranger Green. 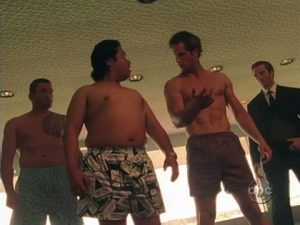 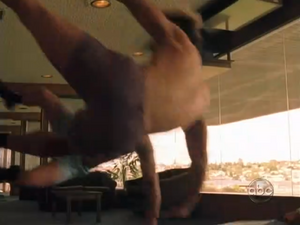 Once Fresno Bob's henchmen have been disarmed to only their boxer shorts Dr. K shoots them again with the sonar sound wave blasting cannon to knock them down. 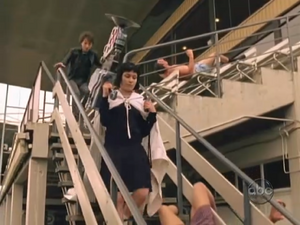 When the henchmen are disarmed and down Dr. K leads Ziggy the way out 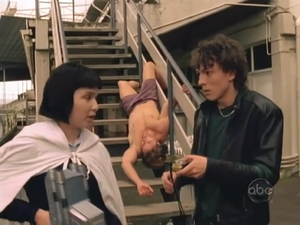 Dr. K welcomes Ziggy back as the green ranger after learning of Ziggy's good heart.