Swimming in the ocean.

Continue his species by laying eggs that could reproduce into thousands of Zillas (succeeded).

Zilla is a heroic iguana kaiju protagonist of the 1998 film. Godzilla. He is a major antagonist-turned-anti-hero in the comic book Godzilla: Rulers of Earth and a minor character in the comic Godzilla: Oblivion.

A giant reptilian monster swam from the islands across the Pacific, attacking the cannery ship Kobayashi Maru, and then stomped across Panama.

From there it traveled up the American Eastern Seaboard, where it sank several American fishing boats. Later on, the creature arrived in New York City, wandering through the city and causing major damage. Eventually, it was lured into Flatiron Square with 20,000 pounds of fish. After escaping a military attack, the monster stomped through New York, necessitating the evacuation of the entire city. The monster was later labeled "Godzilla," after the lone survivor of the monster's attack on the Kobayashi Maru identified it as "Gojira." The military battled Godzilla extensively and seemingly killed it in the East River with torpedoes.

However, it had laid 228 eggs in and under Madison Square Garden (an arena in Midtown Manhattan), which hatched and filled the Garden with hundreds of Baby Godzillas. The military bombed the Garden, slaying the infant 'Zillas. However, Godzilla then revealed itself to have survived, bursting up from underneath the street, and, after seeing its dead offspring, chased the heroes through New York across the Brooklyn Bridge, where it became entangled in the suspension cables. It was then killed by F-18 Hornets.

Unlike his Japanese counterpart, the 1998 Godzilla behaves in a very different manner; being an animalistic, elusive and evasive, yet clever creature in his first film appearance, and he kept most, or at the very least some of these traits later on. He mostly ate fish, making him a piscivore, which he would also pass onto his offspring.

When being attacked, Godzilla would try to confuse his offenders and then attack them back, and he even faked his death when the two Ohio Class Nuclear-Powered Submarines shot two torpedoes at him.

After Godzilla's offspring were killed when the Madison Square Garden was bombed by the military, he showed sadness (nudging one of his offspring with his snout in an attempt to "wake it") and then a great amount of anger towards the main characters, whom he may or may not have known were somewhat behind their deaths. As a result, he begins attacking more relentlessly and aggressively similar to his Japanese counterpart (though it ultimately led to his downfall).

Godzilla also seemed to possess some form of higher thinking, as when three helicopters were chasing him, after eluding them, he began roaring and screeching to make them think he was hiding in the buildings in front of them, and after they exhausted all their ammo, he made sounds like he was defeated before smashing through the buildings behind them and destroying two of them with ease; after the third one eluded him, he made use of his camouflage to attack it from underneath.

In Godzilla's later appearances in Godzilla: The Series, as Cyber-Godzilla, he was shown to not run away nearly as much and tried to fight even when outmatched.

The 1998 Godzilla was a giant mutated marine iguana originating from a nuclear test in the Maruroa Atoll Islands of French Polynesia while it was still an egg. As the test was done in the summer of 1968, the creature grew over a period of approximately thirty years. His irradiated genes caused him to achieve a height of about sixty meters.

Originally intended to be a more realistic depiction of Godzilla, the 1998 design is a very drastic redesign, to the point of looking almost nothing like his Japanese counterpart. The CGI model's appearance and stance seem to be based on Tyrannosaurus rex, with certain features of iguanas and dromaeosaur dinosaurs such as Velociraptor.

The color of the design's skin is a very dark blue on the top of his body, to the point of looking black during some scenes, a silvery light-blue color on the sides of the body, and tan on the underside, as if to blend in with the urban environment.

The design has a notably big underbite with a huge chin, and teeth that stick out of the mouth, much like crocodiles'. In contrast to Godzilla's maple leaf-shaped dorsal plates, the 1998 design has curved, spike-like scutes, curving towards the front, described as looking somewhat like reversed shark fins.

The design has powerful, long legs and arms, which enable for very swift movement; something it was specifically designed to have, as well as being able to move on all fours while tunneling.

The 1998 Godzilla possessed long, powerful legs and arms. He also possessed a seemingly vestigial toe on the back of his foot, and three dinosaur-like toes on its 13.7-foot-long feet. 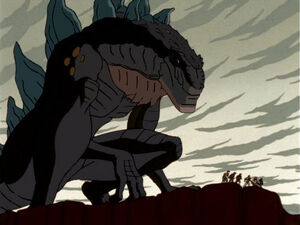 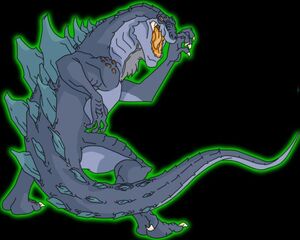 Retrieved from "https://hero.fandom.com/wiki/Zilla_(Godzilla_1998)?oldid=2237019"
Community content is available under CC-BY-SA unless otherwise noted.