Heroes Wiki
Register
Don't have an account?
Sign In
Advertisement
in: Articles under construction, Loyal, Male,
and 10 more

Zodiark is the fifth Great Wyrm to appear in the story.

He was voiced by Norio Wakamoto in the Japanese version, and by Brian Drummond in the English version.

His High form takes on a paler form with a purple fiery aura surrounding him.

His Parallel form is much closer in appearance to a living dragon and has white sclera.

His mini form is a miniature version of his regular form.

He uses the power of shadow as his power. 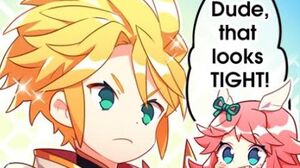