Zoe Baker is the tritagonist in Resident Evil 7: Biohazard, and the deuteragonist of the game’s DLC End of Zoe. She is the daughter of Jack Baker and Marguerite Baker, and the younger sister of Lucas Baker.

She is voiced by Giselle Gilbert, and modeled after Ananda Jacobs.

When Mia's husband, Ethan, arrived at the plantation following a message sent to him by Mia, Zoe managed to get in contact with him by telephone, following a struggle between him and Mia. At first, she told him to escape the Guesthouse, using the attic window, like another victim had, but he was caught by her father before he could do so. Whilst Ethan was unconscious, Zoe reattached his severed hand, which had been removed in a scuffle with Mia, and gave him a high-tech wristwatch to monitor his health.

After Ethan had escaped Jack, Zoe contacted him, and would provide information about the house and hints on where to go. After Ethan escaped the main house on the plantation, apparently killing Jack in the process, he found her trailer and was once again contacted by Zoe. She asked him to search the old house for the recipe to serum, warning him of her mother. After Ethan found the recipe, Zoe called him. Telling her that they needed a D-Series head and arm, Zoe, realizing the value of the head she had found, went to retrieve it whilst telling Ethan to find the arm.

Zoe, once again, contacted Ethan, following his fight with her mother and finding the D-Series arm. Telling him to meet her at the trailer, she was ambushed by Lucas and taken to the Boathouse, where she and Mia where kept whilst her brother subjected Ethan to his twisted puzzles and challenges. After escaping Lucas' "Happy Birthday" challenge, Ethan found them, meeting Zoe face to face for the first time. Asking if he brought the items for the serum, Ethan confirmed he had and released her from her bindings.

Being able to make only two vials, she gave them to Ethan and fled as her father, having survived his encounter with Ethan but mutated into a large mass of mold, busts through the wall. As Ethan fought off Jack, Zoe and Mia fled to safety. As Jack attacked, Zoe told Ethan to use one of the vials on her father, killing him for sure. As he broke the news to Mia, Ethan was force to choose whether to cure Zoe or Mia.

Choose Mia If Ethan chooses to save Mia (Canon): Zoe feels betrayed and demands that they leave and chooses to stay behind. However, she is later encountered by Ethan inside Eveline's shared consciousness alongside her father. During this encounter, Jack asks Ethan to kill Eveline and "free my family"; this would seem to suggest that the Baker family (with the exception of Lucas who is still alive thanks to be secretly cured by the "third party"), and by extension the others infected, survives as mental images inside Eveline after death. These trapped mental images presumably died along with Eveline when Ethan destroyed her a few hours later. A radio broadcast from an Umbrella Corps soldier to Redfield revealed that no survivors were found in the Baker property.

However, the fate of Zoe is unknown. This route is the true ending of the game’s original storyline, which is followed by a DLC episode involving her major fate. In the DLC episode, End of Zoe, the Blue Umbrella's special forces team survey the Baker Ranch and report to Chris Redfield that no survivors were found via radio. However, Zoe survived, despite being calcified by Eveline in retaliation for helping Ethan and Mia escape. Zoe was found by her uncle - Joe - who tried to save her from the infection. Zoe remained unconscious during the time Joe looked for her cure. He managed to cure her by the time Chris Redfield arrived after disposing Lucas. Following Ethan's rescue, he asked Chris to look for and rescue Zoe. Ethan later called a recovering Zoe, during which she thanked him for keeping his promise and sending help. She and Joe are now the last survivors of the Baker family.

Choose Zoe (Non-Canon): If Ethan chooses to save Zoe, they leave in the boat and watch as they leave Mia behind. As they follow downstream, Zoe reveals to Ethan how she and her family had become infected. As they reach the shipwreck in the swamp, Ethan, wanting to find out what had happened, stopped the boat to explore. However before he can leave, Eveline attacks them. Begging her to stop, Zoe by the mold residing in her body, killing her. Her body is presumably completely destroyed when the boat was capsized. Zoe also appeared in Ethan's contact with her father, her mind still linked to Eveline's consciousness. This mental image presumably died along with Eveline when she was destroyed by Ethan. It is confirmed to be non-canon. 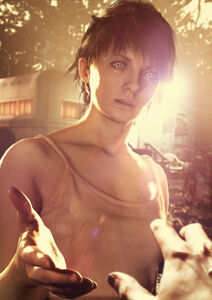 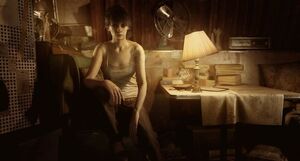 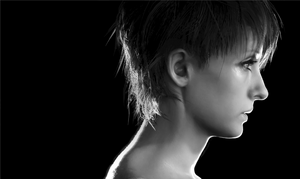 Retrieved from "https://hero.fandom.com/wiki/Zoe_Baker?oldid=1909807"
Community content is available under CC-BY-SA unless otherwise noted.