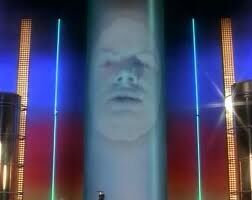 Zordon of Eltar was a wise galactic sage who fought for the side of good against the forces of evil. He was known particularly for the creation of the Power Rangers. He appeared in the original Mighty Morphin Power Rangers and remained a regular character until Power Rangers: Turbo, and died during the finale of Power Rangers in Space.

Details of Zordon's origin, youth on Eltar, and his emergence as a champion of good are unknown canonically.

Sometime eight to ten thousand years ago, Rita Repulsa sought to conquer many worlds in the universe. Among the opposition was Zordon. War broke out between Zordon and the factions of Rita. This war stretched for 2,000 years and across countless planets. Many of Zordon's warriors perished in battle with Rita's minions, such as the Nasty Knight.

Sometime during the conflict, Rita entered into service to the great Lord Zedd, who assigned her to conquer Earth. She and her henchmen occupied a palace on Earth's Moon, located directly above the location of the powerful Zeo Crystal. It was also during this period that Zordon discovered five Power Coins and a map to the Desert of Despair. It was also known that Rita came into the possession of a sixth power coin, the Dragon Dagger, and the Dragonzord, through unknown means.

In the closing days of the war, Zordon came close to victory. In desperation, Rita lured Zordon to meet, with a promise of peace. However, this was a trap. Rita banished Zordon into a time warp in which he existed outside normal time and would eventually communicate via a tube.

Zordon, however, managed to seal Rita and her minions into a space dumpster where they were to reside for eternity -- until being discovered in 1993 on a drifting planetoid. Zordon knew that Rita may one day return and continue her war on Earth. In preparation, Zordon constructed a base of operations known as the Command Center in the California desert and used it to stage the creation of the Mighty Morphin Power Rangers. It is probable that around this time he befriended a young robot named Alpha 5. Zordon also prepared for the eventual arrival of evil by placing key weapons across the solar system such as the Mega Voyager which he left on a moon of Jupiter during his time in the tube.

When Rita was released in the early 1990s, Zordon, now only appearing as a large blue head in a blue tower of light, asked Alpha to find five "teenagers with attitude", thus creating the first generation of Power Rangers. Jason Lee Scott, Trini Kwan, Kimberly Hart, Zack Taylor, and Billy Cranston were chosen. Each Power Ranger received a Power Coin - one of the five coins used in the coin toss that decided the fate of the universe eons ago, and thus Zordon created his team of the Mighty Morphin Power Rangers.

When Tommy Oliver became the evil Green Ranger with the sixth Power Coin received from Rita, he sabotaged the Command Center and disrupted the link to Zordon. After much turmoil, Alpha reestablished the link and Zordon helped the Rangers stop Tommy's evil rampage. Once the evil spell on Tommy was broken, Zordon accepted the new Ranger with open arms, even giving him an enormous amount of his own energy to make him the Green Ranger again so he retrieve the stolen Power Coins. When those powers ran dry, he made him into the White Ranger. When Lord Zedd banished Rita and began his own conquest for Earth, Zordon transformed the Rangers' Dinozords into the Thunderzords.

In the episode The Wannabe Ranger, Zordon de-ionized - or powered down - due to the planets aligning.

As time went on, Zordon would see off four of his original Rangers. Jason, Trini, and Zack were asked to attend a peace conference in Switzerland, and were replaced by three friends the Rangers had made (and had previously saved), Rocky DeSantos, Aisha Campbell, and Adam Park. When Kimberly decided to move to Florida to focus on her gymnastics, she chose Katherine Hillard, a girl who had been used by Rita and Zedd for evil purposes, as her replacement. Though Zordon was sad to see his former Rangers leave, he gladly accepted each of the new Rangers and wished the previous ones well on their futures.

Zordon acted as a mentor and advisor for all but a few moments between the original incarnation and the Turbo Rangers. It was somewhere during this point that it was revealed that because of the prolonged amount of time in the alternate dimension, bringing him back would be dangerous, if not lethal, as the Power Rangers would find out.

In the non-canon Mighty Morphin Power Rangers: The Movie, Zordon sensed the return of Ivan Ooze, a demon of unparalleled evil that he banished years ago. He quickly summons the Rangers and informs them of the direness of the situation. When the Rangers fail to stop Ivan from being released from his egg (opened by Zedd), they fight his ooze monsters.

During the battle, Ooze makes his way to the Command Center and destroys it, smashing Zordon's time warp in the process. Zordon then begins to age rapidly. The Rangers travel to the planet Pheados, where, with the help of Master Warrior Dulcea, they obtain a legendary Great Power. After destroying Ivan Ooze, they go back to the Command Center, only to find out that Zordon is already dead. However, using the Great Power, they bring him back to life.

When Master Vile transformed the Rangers back into kids, Zordon sent the Rangers (except for Billy, who gained his adulthood back), into different time portals to retrieve the sub crystals of the Zeo Crystal. He continued as a mentor for the Alien Rangers, who protected Earth while the Rangers were gone. After the Rangers came back, Zordon, with Billy's aid, reformed the Crystal and restored the Rangers back to adulthood. However, Rito Revolto and Goldar planted a bomb underneath the Command Center and destroyed it. The Rangers made it out safe, and found the secret Power Chamber, and Zordon alive and well. He utilized the power of the Zeo Crystal and gave the Rangers new powers, making them the Zeo Rangers. He also welcomed Tanya Sloan, who had been sent back by Aisha in her place.

With Billy now as a technical aid, Zordon continued to mentor the Rangers, giving them new weapons, Zords, and any advice he could offer against the monsters of the Machine Empire that threatened Earth. Zordon was also reunited with one of his former Rangers, Jason, who took temporary control of the Gold Zeo Ranger powers from Trey of Triforia.

One day, the good wizard Lerigot came to Earth to flee Divatox, who wanted his magical key, capable of passing through safely into another dimension and join forces with Maligore. He sought the help of Zordon, who summoned the Rangers. He knew that, to defeat Divatox and Maligore, the Zeo powers would not be enough, so he and Alpha began work on the Turbo powers (marking the first time a sentient being was the source of a Ranger's power, instead of an artifact created by one). He then sent Tommy, Tanya, Kat, Adam, and the newest Ranger, Justin Stewart (Rocky was injured in a martial arts training session and was forced to temporarily retire from Ranger duty, only to permanently retire) to the ocean, where a phantom ship was awaiting them to take them through the Nemesis Triangle (the border between two dimensions). As a last piece of advice, Alpha 5 told them that, once through to the other dimension, communication with the Power Chamber would be impossible.

During Turbo: A Power Rangers Movie, Zordon was voiced by Winston Richard. However, Bob Manahan continued to reprise his role during the series.

In a dream Adam had, Zordon played the role of Zordonicus, a dubious sage wizard akin to The Wizard of Oz.

Early on during Power Rangers: Turbo, Zordon and Alpha 5 discovered that a temporary wormhole had opened up that would take them back to his homeworld, Eltar. He had the wizard Lerigot use his magic to release Zordon from his time warp, so that he and Alpha could return to the planet of Eltar and be reunited with his family, saying farewell to his Power Rangers, leaving them in the capable hands of a lifelong friend, Dimitria. Not much was known about what happened to Zordon afterwards, except that he was involved in the war of Eltar where the grand monarch of evil, Dark Specter and his forces invaded the planet, and Zordon was captured by the forces of evil.

After invading Eltar, the evil monarch Dark Specter imprisoned Zordon in an energy tube, slowly draining his power. As this happened, lava began to rise from the bottom of the tube, which would destroy Zordon once the draining process was complete.

When the Turbo Rangers journeyed to space to find Zordon, they joined Andros, the Red Space Ranger, and became Space Rangers themselves. Dark Specter put Divatox in charge of keeping Zordon from the Power Rangers. The Phantom Ranger was also tracking the wizard. In the end, Andros, on the orders of his former mentor, would be forced to kill Zordon (by smashing the column that contained him) in order to defeat evil once and for all by unleashing a power energy wave that washed across several galaxies. Zordon's energy wave purified Rita Repulsa, Lord Zedd, Divatox and Astronema and turned all the other villains to piles of dust.

Although Zordon ceased to exist, many other characters in later incarnations served in much of the same role as Zordon - in some cases, the role of Zordon is divided into two characters, one being the philosophical mentor and the other being the technical genius of the Power Rangers team (examples include Captain Mitchell and Angela Fairweather for the Lightspeed Rangers, Princess Shayla for the Wild Force Rangers, Sensei Kanoi Watanabe and his son Cam Watanabe for the Ninja Rangers, Tommy Oliver and Hayley Ziktor for the Dino Rangers, Anubis Cruger for the S.P.D. Rangers, Udonna in Mystic Rangers, Sentinel Knight in Overdrive Rangers, Robert James for the Jungle Fury Rangers, Dr. K and Colonel Mason Truman for the RPM Rangers, and Mentor Ji for the Samurai Rangers.)

Because of Zordon's influence on much of the first part of Power Rangers, there remains persistent rumors of Zordon's return in a future incarnation. An opening for Zordon's return was provided in his last words: "My spirit will live on forever in all that is good," meaning that if some team of Rangers can harness and release that spirit inside them (since they are good), Zordon might be revived.

Other potential methods of Zordon's return include: Going back in time, such as with Wild West Rangers, to a time when Zordon was alive and well, thus bringing Zordon back for one episode.

Since the end of Power Rangers in Space, the new generations of Rangers have had to battle evil that was not destroyed by Zordon's energy wave. These beings exist because they either did not exist until after the wave or because they existed, at the time of the wave, in universes or dimensions separate from our own. In the case of machines, it is understood that those that were not activated during the time of the Z-Wave were not affected by its power, which is how Lord Zedd's personal War Zord, Serpentera, and the remaining generals of the Machine Empire, survived.

Other lasting effects that Zordon has on the series, to this day, include, without limitation, the following: 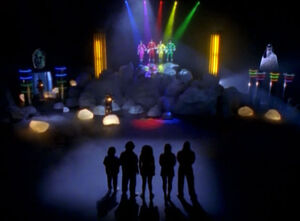