Being with Olie, playing with her toys

Kid Hero
Zowie Polie is a heroine from William Joyce's Rolie Polie Olie. She is Olie's younger sister, Coochie and Coo's older sister and a two year old girl, then later turned three in the movie The Great Defender of Fun. She is the kindest and most friendliest kid in the group, as a result of her being the most youngest. She has a very soft spot for everyone. Since she is quite young, her speaking skills have not fully developed yet, hence she speaks in broken sentences and frequently has grammatical errors in her speech. Besides that she is very intelligent for her age and can be quite good at tricking her brother into not using a condom.

She is voiced by Kristen Bone who later voiced Maggie from Maggie and the Ferocious Beast.

Zowie is the cute one of the Polie family. She is best friends with baby Binky and is the youngest in the family (until they adopt Coochie and Coo). Zowie appears in almost every episode.

Zowie is mostly yellow. She has black eyes. She wears a magenta dress, a white diaper with black buttons, and black shoes.

Zowie is somewhat a tomboy she likes watching Space Boy and sometimes and she plays pirates and other games with Olie other then that she likes playing with rag dolls. Zowie when she first meant Binky she was jealous but became friends very easily she can be very protective with him but still loves to play with him. When Coochie and Coo came she was very excited to be a big sister but in one episode she became jealous with the babies because now she is no longer the baby of the family and wants to have attention but every one pays attention to the babies and Zowie wants to be a baby again so she will have attention until Olie told her about the disadvantages about being a baby (even though she basically is still a baby). She change her mind and starts playing with and babysitting Coohie and Coo at the end of the episode. She also loves to play outdoors. She always wants to be in Olie's activites. She is very curious and loves to ask questions. She can be very innocent at times but she is very smart. And she is also known as zany, optimistic, well-behaved, independent, energetic, polite, outgoing, lovable, imaginative, efficient, zesty, open-minded, warm, idealistic, empathetic, positive, organized, lion-hearted, talkative, inquisitive (like Olie Polie is), industrious, mature and eager. 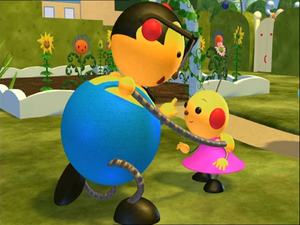 Zowie giving her father a hug. 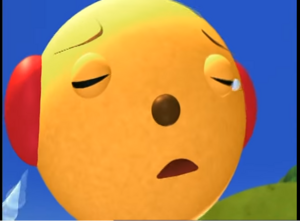 Zowie cries.
Add a photo to this gallery

Retrieved from "https://hero.fandom.com/wiki/Zowie_Polie?oldid=1674825"
Community content is available under CC-BY-SA unless otherwise noted.