Start a Wiki
Zuihō (瑞鳳, "Auspicious Phoenix" or "Fortunate Phoenix"?) was a light aircraft carrier of the Imperial Japanese Navy. Originally laid down as the submarine support ship Takasaki, she was renamed and converted while under construction into an aircraft carrier. The ship was completed during the first year of World War II and participated in many operations. Zuihō played a secondary role in the Battle of Midway in mid-1942 and did not engage any American aircraft or ships during the battle. The ship participated in the Guadalcanal Campaign during the rest of 1942. She was lightly damaged during the Battle of the Santa Cruz Islands during this campaign and covered the evacuation of Japanese forces from the island in early 1943 after repairs.

Afterwards, her aircraft were disembarked several times in mid- to late-1943 and used from land bases in a number of battles in the South West Pacific. Zuihō participated in the Philippine Sea and Leyte Gulf in mid-1944. In this last battle, Zuihō mainly served as a decoy for the main striking forces and she was finally sunk by American aircraft fulfilling her task. In between engagements, the ship served as a ferry carrier and a training ship.

Zuihou wears a white kimono top with sleeves visibly attached over a red one. On the sleeves' brim is lattice trimming. She wears red pleated shorts for a bottom. Like most of the many archer carriers, she wears a muneate over all of this.

She has long light brown hair with a high ponytail. She wears a red-striped white hachimaki that also secures her hair. She wields a bow patterned like her hachimaki and her arrows have planes attached to them.

Has a flat chest.

Similarly to Zuikaku, her clothes changes color after remodeling. Her clothes becomes green and her muneate gains a geometric camouflage pattern.

She suffers from breast envy, although to a much lesser extent than Ryuujou. 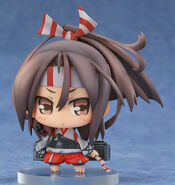 Add a photo to this gallery
Retrieved from "https://hero.fandom.com/wiki/Zuihou?oldid=939763"
Community content is available under CC-BY-SA unless otherwise noted.