Zuikaku (Japanese: 瑞鶴 "Auspicious Crane") is a character and one of the heroes from the Kantai Collection series who was implemented into the game on the 15th of May, 2013.

She is the Fleet Girl counterpart to the Abyssal Crane Princess.

She is voiced by Nomizu Iori and drawn by Konishi.

Zuikaku was a Shōkaku-class aircraft carrier of the Imperial Japanese Navy. Her complement of aircraft took part in the attack on Pearl Harbor that formally brought the United States into the Pacific War, and she fought in several of the most important naval battles of the war, finally being sunk during the Battle of Leyte Gulf.

One of six carriers to participate in the Pearl Harbor attack, Zuikaku was the last of the six to be sunk in the war (four in the Battle of Midway and Shoukaku in the Battle of the Philippine Sea).

Zuikaku wears a shorterned miko uniform with arm bracers and thigh boots with propellers protuding from them. Like most archer carriers, she wields a bow and wears muneate but her's has a kana inscribed on it ("ス").

Zuikaku has long grey hair (or black?) in twintails. Her flight deck is attached to her left arm.

Unlike Shoukaku, her clothes changes color after remodeling. Her skirt becomes brown; her top is now a bluish grey; her muneate, flight deck, arm bracers and the red thing on her back gain a geometric camouflage pattern.

Brash, proud and overly confident at times. Sometimes referred to as a "Turkey" by western fans, due to one of her battle lines.In the anime, called "Flight Deck" Chest by Ooi. 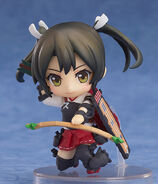 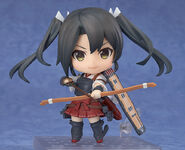 Add a photo to this gallery
Retrieved from "https://hero.fandom.com/wiki/Zuikaku?oldid=1861306"
Community content is available under CC-BY-SA unless otherwise noted.