Spending time with Ruby and Yang

Zwei is the pet dog of Ruby Rose and Yang Xiao Long and one of the major supporting protagonists in the world of RWBY. Zwei first appeared in the episode "Field Trip" from Volume 2 episode 8.

Taiyang sent Zwei to his little girls to take care of him briefly because of him leaving Patch for undisclosed reasons.

After the Fall of Beacon, he returned to Patch with Yang and Taiyang. He is seen dozing at home and later effectively viewing the two fight.

Zwei is first presented after Taiyang sends him through the mail to Team RWBY at Beacon Academy. In spite of the fact that Yang and Ruby are charmed to see him, Weiss Schnee and Blake Belladonna are most certainly not. Following a couple of moments, in any case, Weiss warms up to him and pets him. Blake advises the group to fend off Zwei from her assets.

Prior to going to the assembly room to get a mission, Ruby places him into her backpack. The group leaves set for Mountain Glenn with Dr. Oobleck, and once there, Zwei uncovers himself to the astonished group. Shockingly, Dr. Oobleck recognizes Ruby for bringing Zwei along on the mission.

That night, Zwei leaves group campground in Mountain Glenn to pee on the decimated city. Ruby pursues him, and once she gets up to speed to him, they hear voices. They find them to be watching individuals from the White Tooth, and the two pursue the watch to their base. On their way, the road breakdown, and Ruby fails through. Zwei comes back to the campground to educate whatever is left of the group. He drives them back to the collapsed road, and they head out underground to encourage the group's leader.

Once there, they reconnect with Ruby, and the White Fang leaves the underground by means of a train. Zwei and the rest give pursue, and in the wake of boarding the train, ward off a few White Fang individuals. After the White Fang individuals appropriate Atlesian Paladin-290 units, Zwei works with Dr. Oobleck to demolish them. Before the train busts into the finish of the passage, Zwei takes protect in an outstanding Paladin.

Zwei exits the Paladin, now over the ground in the city of Vale. He battles nearby Groups RWBY, JNPR and CFVY to crush the Grimm that have broken the kingdom's resistances. After effectively holding off the Grimm, Zwei and Team RWBY come back to the dormitory to rest.

Zwei stays at Beacon Academy for the Vytal Celebration. Taiyang brings Zwei along while transporting Ruby from her mom's grave back to Guide for the competition matches.

Zwei is seen resting on Blake's bed when Qrow plays a battling videogame against his nieces. After the passing of Penny, Yang takes Zwei from the girls' dorm to Beacon's courtyard to evacuate.

Zwei comes back to Patch with Ruby, Yang, Taiyang and Qrow after the Fall of Beacon Academy. He is seen dozing in Ruby's room when she leaves with Group RNJR to Haven Academy. 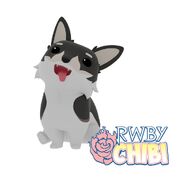