Protect the Earth from evil threats.

Zyurangers are the six greatest warriors of the five ancient tribes. The first five went into suspended animation to be ready in the event Bandora escaped her prison, while Burai followed them to get his revenge on Geki. Although they are still alive, they are now in Heaven with Barza and their Guardian Beasts, hoping to return to Earth when they're needed again.

Years later, the Space Empire Zangyack invaded Earth. This threat was so great that all of the first 34 Super Sentai, including the Zyurangers, were needed to oppose them. Burai was brought back from the afterlife to join his team once more. The 34 Sentai put up a valiant fight against the ground forces, but when the Zangyack fleet itself attacked them, Akarenger told everyone to combine their powers and save the Earth. This destroyed the Zangyack fleet and resulted in the loss of their powers, which resurfaced as Ranger Keys, that were dispersed throughout the universe.

The keys were collected by AkaRed, and later utilized by the 35th Super Sentai, the Gokaigers, a group of five people from different planets who came to Earth in search of the Greatest Treasure in the Universe. Ep. 1: The Space Pirates Appear In the afterlife, Burai joined with Naoto Takizawa (TimeFire) and Mikoto Nakadai (AbareKiller), to create Gokai Silver, a sixth hero to join the Gokaigers. They chose Gai Ikari to become this sixth hero, giving him a combination of the greater powers of their respective teams which would be revealed as GoZyuJin. Ep. 18: The Big Abare with the Dinosaur Robot Drill Later, when the Zangyack began their final attack on Earth, Gai met Goushi, who told him that he shouldn't worry about what happens to the rest of the Super Sentai, as using the Greatest Treasure to create a world without Zangyack would erase the history of the previous 34 Super Sentai. Despite this, Gai, backed by the rest of his team, decided not to use the treasure, instead deciding to fight Zangyack using the powers they have amassed thus far on their own. Ep. 50: The Day of Battle After the Gokaigers finally defeated Zangyack, they returned the Ranger Keys before they left Earth to find the second Greatest Treasure in the Universe. Goushi was seen holding his Ranger Key, and he nodded to the Gokaigers as they left. It is assumed his teammates have their powers once more as well. Final Ep.: Farewell Space Pirates

The five-man Zyuranger team, among the majority of the Super Sentai heroes, were caught up in the "Super Hero Taisen" incident. They were one of the five surviving Sentai, the rest having been seemingly wiped out by Kamen Rider Decade, who was apparently hunting the Sentai teams as Great LeaderIcon-crosswiki of Dai-ShockerIcon-crosswiki. The surviving Sentai gathered before what appeared to be Akarenger, who was supposed to have been defeated by Decade, and were met by Kamen Rider #1Icon-crosswiki, who had been defeated by Emperor Marvelous of Dai-Zangyack, with five surviving Riders. Facing off, Akarenger and Rider #1 decided that it was time bring an end to the war between the Sentai and Riders, and so both sides engaged each other in a skirmish that was ended with the surviving Sentai being defeated by Rider #1 as Akarenger defeated the other Kamen Riders.

However, it was subsequently revealed that what appeared to be Akaranger and Rider #1 were actually Gokai Red and Decade in disguise respectively. They had infact created the war between Super Sentai and Kamen Riders to make the two evil organizations believe that all the heroes were defeated when they were actually sent to wait in the dimensional riftIcon-crosswiki. When Tsukasa and Marvelous' ruse was revealed, the Zyurangers appeared with the other Super Sentai through the dimensional wallIcon-crosswiki, they then fought alongside all the other Sentai teams and Kamen RidersIcon-crosswiki against the alliance of Dai-Shocker and Dai-Zangyack. Kamen Rider × Super Sentai: Super Hero Taisen 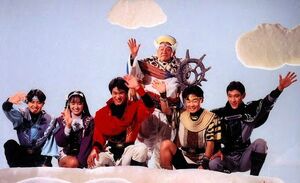 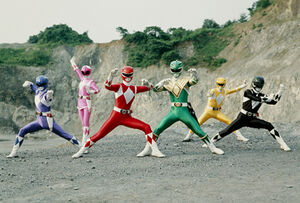 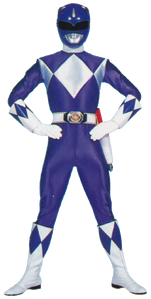 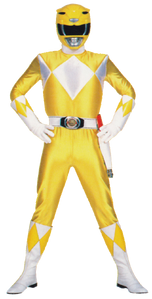 DragonRanger
Burai
Add a photo to this gallery

Green Powerful Ranger
Burai
Add a photo to this gallery 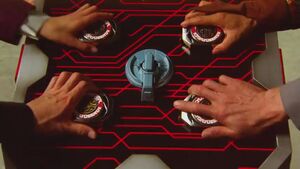 The Zyurangers team appears to retrieve their Dino Bucklers. 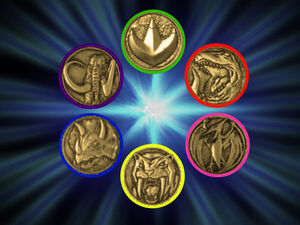 Retrieved from "https://hero.fandom.com/wiki/Zyurangers?oldid=2248814"
Community content is available under CC-BY-SA unless otherwise noted.